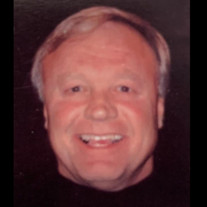 Philip James Philipp, 72, of Cedar Rapids, Iowa, passed away peacefully at his home on Thursday, May 26th, 2022. Vigil service will be held Monday, May 30, 2022, from 5-7pm at Murdoch-Linwood Funeral Home in Cedar Rapids. A funeral service will be held Tuesday, May 31, 2022, 10:30am at St. Ludmila Catholic Church with Rev. Ken Glaser officiating. Burial will follow at St. John’s Cemetery in Cedar Rapids. Phil was born August 6, 1949, in Cedar Rapids, the son of Frederic and Emily (Tomas) Philipp. He attended LaSalle High School and went on to Loras College. Phil was united in marriage to Jeanne Ann Greiner on October 28, 1978, at St. Ludmila’s Church in Cedar Rapids. He co-owned and operated Philipp Trucking. Phil also worked for Coldwell Banker Hedges Realty, R.L. Smith Realty, Dun & Bradstreet, & Waterloo Industries. He was a member of St. Ludmila Catholic Church, Loras College Alumni, and The University of Iowa I-Club. Phil was a confident, kind-hearted and social man. He had a tough time making a short trip to the grocery store because he would run into many friends or family in the process. He never said no to someone in need. He worked many long days but never hesitated to offer assistance when someone needed his help. A lifelong Iowa Hawkeye fan he shared that passion with his wife and kids. For nearly 40 years, he was a season ticket holder of Iowa Hawkeye Football, he also attended many Hawkeye Basketball games, Wrestling meets and NCAA/BIG10 Tournaments. Phil frequently found ways to get into reserved areas or onto the field near one of the coaches. He also found his way to one of the side stages of a Rolling Stones concert by taking a few left turns. Phil was extremely competitive, lettering in football and wrestling at LaSalle and Loras College. He excelled in flag football and softball leagues after college and helped coach his kids in all sports. He would turn any task into a contest, from putting on his seatbelt first in the car to joining in sprints at the end of his sons’ basketball practice after a long day of work. In later years he enjoyed watching his children compete in sports and filled in if their softball lineup was short a player. He was someone people always wanted to be around. He had a nickname for everyone and made you feel special just by being near him. Dad, you are the coolest dude and a one in billion guy. You will not be forgotten. Survivors include his wife, Jeanne; children, Nick (Samantha) Philipp of Redondo Beach, CA, Austin (Tiffany) Philipp of Chicago, IL, and Mackenzie Philipp of Cedar Rapids; granddaughter, Naomi Bloom Philipp; siblings, Faith (Steve) Seehawer, Teresa Byrne, Fred (Jennifer) Philipp, Hope Hugh, Charity (Terry) Schneekloth, Mary (Bill) Brecht, Pat (John) Roberts, Ed (Cheri) Philipp, Ann Ranard, Dave (Teresa) Philipp, Tina (Tom) Anderson, and Paul (Diana) Philipp and siblings-in-law Larry Greiner, Patty Hilton (Brent Meyer), Bob Greiner, Jack (Nancy) Greiner, Mike Greiner, Rick (Susan) Greiner, Bill Greiner, and Jolene Rehklau. He was preceded in death by his parents, Fred and Emily Philipp; son, Doug Philipp; brother, Danny Philipp; sister, Patience Jellen; nieces and nephews, Keri Philipp, Tabitha Hugh, Emma Hugh, Drake Whitters, and John Philipp; brothers-in-law, Rhinard Hugh, John Rehklau, and Gerald Byrne; and sisters-in-law, Tina Greiner and Deborah Greiner. In lieu of flowers, donations can be made in his name to St. Ludmila Catholic Church, Mercy Hospice Care or Xavier Foundation.

Philip James Philipp, 72, of Cedar Rapids, Iowa, passed away peacefully at his home on Thursday, May 26th, 2022. Vigil service will be held Monday, May 30, 2022, from 5-7pm at Murdoch-Linwood Funeral Home in Cedar Rapids. A funeral service will... View Obituary & Service Information

The family of Philip James Philipp created this Life Tributes page to make it easy to share your memories.

Send flowers to the Philipp family.