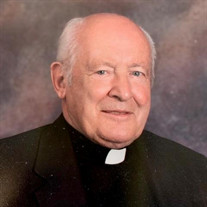 Fr. Phillip E. Schmitt, 91, of Cedar Rapids, Iowa, died Friday, December 31, 2021. His body was donated to the UI Deeded Body Program. Funeral Mass will take place at 10 a.m. Monday, January 17, 2022, at Immaculate Conception Catholic Church in Cedar Rapids. Archbishop Michael O. Jackels will officiate. Masks are recommended. A livestream of the funeral mass will be available at service time at https://www.youtube.com/c/ImmaculateConceptionCatholicChurch. Burial at St. Mary’s Cemetery in Roseville, Iowa, will take place later. Arrangements by Murdoch-Linwood Funeral Home, Cedar Rapids, Iowa. Fr. Schmitt was born November 20, 1930, in Marble Rock, to George and Estella (Grace) Schmitt. He graduated from Loras College and completed his theological studies at the former Mount St. Bernard Seminary, both in Dubuque. On February 4, 1956, he was ordained at St. Raphael Cathedral in Dubuque by Archbishop Leo Binz. He served as associate pastor of Nativity Parish in Dubuque, 1956-59; Assumption Parish in Cresco, 1959-63; and St. Joseph Parish in Bellevue, 1963-70. While serving in those towns, he taught at Visitation Academy in Dubuque, Notre Dame High School in Cresco, and Marquette High School in Bellevue. He was executive coordinator of Marquette High School in Bellevue, 1966-77, and administrator of SS. Peter & Paul Parish in Springbrook, 1970-77. He was a member of the faculty of Columbus High School in Waterloo, 1977-80. In 1980, he served as metropolitan coordinator of the Catholic School System for Cedar Rapids and Marion. From 1980-1985, he was pastor of Holy Trinity Parish in Walford and from 1985-91 at Immaculate Conception Parish in Cedar Rapids. He served as pastor of St. Mark Parish in Iowa Falls from 1991 to 2000. Fr. Schmitt retired from the priesthood in 2000. In 2001, he moved to the priest’s quarters at St. John Catholic Church in Mount Vernon, where he lived for 17 years. He moved to Meth-Wick Community in 2018 and remained there until his death. Fr Schmitt was a founding member of the National Association of Priest Pilots (the Flying Padres). As a long-time board member of National Marriage Encounter., he was incredibly dedicated to Engage Encounter and marriage preparation. He served as a chaplain at Kirkwood Community College for several years in retirement. He loved gardening, especially flowers, and became a certified Master Gardener. The family would like to thank the Meth-Wick Community for the exemplary care provided, especially by Custom Care Assisted Living and The Woodlands staff. Survivors include his sister, Maxine Bouchonville of San Antonio, Texas, and brother, Dr. Marvin (Sue) Schmitt of Solon, Iowa. He was preceded in death by his parents, George and Estella Schmitt, and siblings, Richard Schmitt and Delores Gosczcynski.

The family of Fr. Phillip E. Schmitt created this Life Tributes page to make it easy to share your memories.

Send flowers to the Schmitt family.