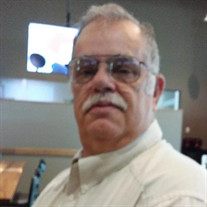 Randall Joseph Beelner, 72, of Cedar Rapids, Iowa, passed away unexpectedly on Wednesday, September 1, 2021, the day that would have been his 49th Wedding Anniversary at his home. In agreement with his wishes, cremation has taken place. A Funeral Mass will be held at 10:30 a.m. on Tuesday, September 14, 2021, at St. Pius X Catholic Church located at 4949 Council Street NE in Cedar Rapids, Iowa, where family will greet friends for one hour prior to the Mass. The Reverend Phil Thompson will officiate. A private inurnment will take place at Mt. Calvary Cemetery in Cedar Rapids. Randall was born on October 3, 1948, in Paullina, Iowa, one of three sons to Joseph and Vivian (Rolfes) Beelner. He was united in marriage to Delhia “De” Tapia on September 1, 1972, in San Diego California. Randall was formerly employed with the former P.M. Lattner Manufacturing Co. as a welder and mechanic for many years, until his retirement. He was a member of St Pius X Catholic Church, the Walden Archery Club, and a Fourth Degree member of the Knights Of Columbus - Assembly #3188. Randall volunteered countless hours at Mercy Medical Center. He will be greatly missed by all who knew and loved him. Randall is survived and lovingly remembered by his two brothers, Gerald “Pete” (Marie) Beelner and Robert (Carolyn) Beelner both of Iowa City, Iowa; six nieces and nephews, Jeano Elliott of Coralville, Iowa, John Beelner of Iowa City, Iowa, Joe (Shannon) Beelner of Ankeny, Iowa, Jacquie (Matt) Gorsh of Williamsburg, Iowa, Carrie (Jason) Nadziejko of Aurora, Illinois, and Kimberlee (Kevin) Stiers of North Liberty, Iowa. He was preceded in death by his parents; and beloved wife, Delhia, on June 20, 2021. In lieu of flowers, memorials in Randall’s memory may be made to either St. Pius X Catholic Church or Knights Of Columbus at 5650 Kacena Avenue, Marion, Iowa, 52302.

Randall Joseph Beelner, 72, of Cedar Rapids, Iowa, passed away unexpectedly on Wednesday, September 1, 2021, the day that would have been his 49th Wedding Anniversary at his home. In agreement with his wishes, cremation has taken place. A Funeral... View Obituary & Service Information

The family of Randall Joseph Beelner created this Life Tributes page to make it easy to share your memories.

Send flowers to the Beelner family.