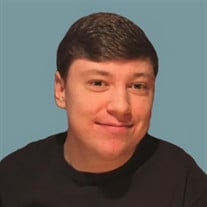 One of our gifts from God, Reid Michael Shadle, 24, of Cedar Rapids, Iowa, went to be with his sister and our Lord and Savior, Jesus Christ, on Wednesday, March 16, 2022. The family will greet friends and family from 4:00 to 7:00 p.m. on Monday, March 21, 2022, at Murdoch Funeral Home & Cremation Service in Marion, Iowa. A funeral service will be held at 1:00 p.m. on Tuesday, March 22, 2022, at First Presbyterian Church in Marion, with an additional visitation one hour prior to service at the church. Pastor Jim Langley will officiate. Burial will follow at Cedar Memorial Park Cemetery in Cedar Rapids. A livestream of the funeral service may be accessed on the funeral home website tribute page for Reid, under “photos and videos or media,” starting at 1:00 p.m. on Tuesday. Reid was born on August 14, 1997, in Iowa City, Iowa, the son of Craig and Vicki (Sloan) Shadle. He was a member of First Presbyterian Church of Marion. Reid was a 2016 graduate of Linn-Mar High School. He also graduated from the Project Search Program through ARC. He went on to accept a position at Chili’s as a host. Reid was an avid sports fan. His favorite teams were the Iowa Hawkeyes and the Kansas City Chiefs. In 2008, Reid was awarded a trip through the Make-A-Wish Foundation. He traveled to Las Vegas, Nevada, where he had the opportunity to meet the USA Men’s Basketball Team at training camp before they traveled to Beijing. Reid had a basketball that was signed by the team and took photos with the players, including Kobe Bryant. In 2009, he was selected to be the Kid Captain at the University of Iowa for the Orange Bowl. Just this year, he was able to complete 25 brackets for the NCAA men’s basketball, March Madness. Reid had the honor of being asked to serve on the Youth Advisory Council for the new Children’s Hospital in Iowa City, where he was able to provide a child’s perspective. He was very well known at the University of Iowa Hospitals and he was very close to all of his medical team that supported him over the years. Reid was very opinionated, loved food, and had a great sense of humor. He enjoyed going to Lake Delhi and spending time with his family and friends. Reid had fun growing up with his cousins. He had friends that would come from all over to spend time with him. Reid loved his nieces and nephew, always wanting to pick out their gifts for every occasion. He had a great birthday celebration last year, and in true Reid fashion, has gifted his savings to his brother Tyler and his family, so that they can take a trip to Disney World. Reid also enjoyed taking care of his beloved trouble-maker dog, “Tucker”. He will be greatly missed by all who knew and loved him. Reid is survived and lovingly remembered by his parents, Craig and Vicki Shadle; his brother, Tyler (Amanda) Shadle and their children, Kaydence, Beckett, and Tenley of Marion; maternal grandparents, Larry and Lois Sloan; numerous aunts, uncles, cousins, and friends; and his dog, Tucker. He was preceded in death by sister, Jill Shadle in 2016; his paternal grandparents, Stanley and Kay Shadle; uncle, Scott Shadle; and aunt, Lori Sue Sloan. Memorials in Reid’s memory may be made to either the family or to the First Presbyterian Church.

One of our gifts from God, Reid Michael Shadle, 24, of Cedar Rapids, Iowa, went to be with his sister and our Lord and Savior, Jesus Christ, on Wednesday, March 16, 2022. The family will greet friends and family from 4:00 to 7:00 p.m. on Monday,... View Obituary & Service Information

The family of Reid Michael Shadle created this Life Tributes page to make it easy to share your memories.

Send flowers to the Shadle family.