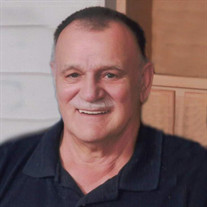 Richard Eugene Banes, 81, of Cedar Rapids, Iowa, formerly of Palo, Iowa, died Friday, May 14, 2021, at his home. A visitation will be held from 4-8 p.m. on Thursday, May 20, 2021, at Murdoch-Linwood Funeral Home & Cremation Service in Cedar Rapids. A funeral service will take place at 10 a.m. on Friday, May 21, 2021, at the funeral home. Burial will take place at a later date at National Cemetery in Vining, Iowa. All guests are respectfully requested to wear a mask and practice social distancing. A livestream of the funeral service may be accessed on the funeral home website tribute page for Richard, under “photos and videos or media,” starting at 10 a.m. on Friday, May 21, 2021. Richard was born on December 18, 1939, in Dysart, Iowa, the son of Frank and Agnes (Yilek) Banes. He graduated from Clutier High School. He was married to his first wife, Barb, and from that union they had six beautiful children. Richard worked for Sanitary Farm Dairy, Terry’s Transfer, and finally at Fleck Sales as a delivery and warehouse worker for 19 years until his retirement. He was a member of the Knights of Columbus Co. 5544, a lifetime member of the Knights of Columbus Fourth Degree, and a member of the VFW in honor of his sons, Timothy and Dan Banes. Richard was united in marriage to Laura Marie (Ziemer) Kadlec on April 12, 2013, at St. John XXIII Parish in Cedar Rapids. He was an avid bowler at May City Bowl. Richard is survived by his wife, Laura; six children, Thomas and Jane Banes and their daughter Brianna, Christine Schulte and her children Adam, Ashley, Nicole, Trent, and Sarah, Cynthia and Scott Minehart and their children Lewis, Kyle, and Amanda, Dan and Terri Banes and their children Danika, Chelsey, Hunter, and Emi, Randy Banes (Nancy Blanchard) and his children Lindsey and Molly, and Tim and Karen Banes ; one brother, Roger Banes of Bonney Lake, Washington; step-children, Kenneth, Keith (Justine) and their children Cameron, Maci, and Madison, Karen Graber and her children Tucker, Michael, Kevin (Traci), and Jake, Kurt Kadlec, and Kate and her children Samuel and Lauren; and ten great-grandchildren, Cora, Rhett, Rowan, Isabella, Julia, Kaston, Kannen, Sutton, Gabe, and Tate. He was preceded in death by both parents; his first wife, Barb in 2003; sisters, Carlene and Betty; brothers, Vernon, Franklin, and Allan; and son-in-law, Neil Schulte. Memorials may be directed to a VFW of choice or Xavier High School.

The family of Richard Eugene Banes created this Life Tributes page to make it easy to share your memories.

Send flowers to the Banes family.