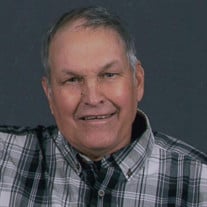 Richard “Dick” Keith Balster, 73, of Coggon, Iowa, passed away peacefully on Monday, March 8, 2021, at his home, surrounded by his family, after a four-year battle with cancer. A private family service will be held. Family will greet friends from 2 to 5 p.m. on Saturday, March 20, 2021, at Murdoch Funeral Home & Cremation Service in Marion, Iowa. Inurnment will be held at a later date at Coggon Cemetery in Coggon. All guests are respectfully requested to wear a face mask and practice social distancing. Dick was born on June 23, 1947, at St. John Hospital in Monticello, Iowa, the son of George H. and Mary (Petersen) Balster. He was a 1965 graduate of Coggon School. In high school, Dick played varsity football and was president of the FFA. After graduation, he worked construction for 18 years and was a member of the Carpenters Union 308, but always knew he wanted to farm. Dick bought his first 80 acres in 1968. On April 17, 1971, Dick was united in marriage to the love of his life, Wanda Webster. To this union three girls were born, Sheri, Beth, and Sandy. Dick and Wanda would have celebrated their 50th Wedding Anniversary in April. After buying the family farm, Dick began farming full-time in the early 1970’s, where he enjoyed raising livestock and row crops. He was a member of the cattleman, sheep, and hog producers associations at the county and state level. Dick enjoyed showing livestock with his daughters at the fairs with livestock he raised and they did very well. He was also a 45 year member of the Coggon Lions Club, was on the North Linn School Board for 15 years, and the Linn County Zoning Board for 10 years. Nearing retirement in the early 2000’s, he began trail riding and has ridden in 13 different states from Arkansas to Wyoming. In 2009, Dick and Wanda bought a second home in Custer, South Dakota. There he enjoyed riding horses, and ATV’s; however, due to cancer, he had to give up horseback riding in 2019. Dick will miss the trail rides in Northeast Iowa, Big Creek, and cross-country trail rides in the spring and fall, where he met and made lifelong friends over the years. He also enjoyed going to hundreds of ballgames to watch his grandkids play baseball, football, and basketball from little league, AAU, junior high, high school, and college. A basketball tournament game in the winter was as good as it got. Dick is survived and lovingly remembered by his wife, Wanda Balster of Coggon; three daughters, Sheri (David) Miller of Walker, Beth (Ray) Kamin of Robins, and Sandy (Kurt) Shover of Cedar Rapids; seven grandchildren, Nicole, Ryan, and Austin Miller, Nick, Ben, Julia, and Sophia Kamin; one sister, Ruth Balster (Ed Goodman) of Boulder, Colorado, one sister-in-law, Kathy Balster of Dekalb, Illinois; one brother-in-law, Wayne (Pat) Webster of Walker; one nephew, and five nieces. He was preceded in death by his parents; and one brother, George Balster. As Dick would have wanted to say, “Till we all meet again at the big round up high in the sky, Happy Trails!” In lieu of flowers, memorials in Dick’s memory may be made to the Dennis & Donna Oldorf Hospice House of Mercy at 315 18th Avenue in Hiawatha, Iowa, 52233.

Richard &#8220;Dick&#8221; Keith Balster, 73, of Coggon, Iowa, passed away peacefully on Monday, March 8, 2021, at his home, surrounded by his family, after a four-year battle with cancer. A private family service will be held. Family will greet... View Obituary & Service Information

The family of Richard "Dick" Keith Balster created this Life Tributes page to make it easy to share your memories.

Send flowers to the Balster family.