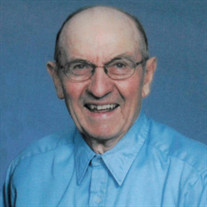 Richard “Dick” Edmund Krog, 90, of Central City, Iowa, passed away on Friday, July 9, 2021, at St. Luke’s Transitional Care Center in Cedar Rapids, Iowa. In agreement with his wishes, cremation has taken place. A Memorial Service will be held at 10:30 a.m. on Saturday, July 31, 2021, at St. Paul’s Lutheran Church located at 915 27th Street in Marion, Iowa, where the family will greet friends for one hour prior to the service. Military Honors will follow the service. A private inurnment will take place at Cedar Memorial Park Cemetery in Cedar Rapids. Dick was born on March 20, 1931, in Stanton, Nebraska, son of Waldemar and Myrtle (Moritz) Krog. He was a graduate of Marion High School, where he lettered in football and other sports. Dick served honorably in the United States Army during the Korean War. On February 24, 1957, he was united in marriage to Marylyn J. Davis in Marion. Dick was born to be a farmer and had a passion for raising cattle. He farmed together with his brother Warren in the Central City area for 62 years. Dick was a member of St. Paul’s Lutheran Church in Marion. He had an infectious sense of humor. Dick was a loyal Iowa Hawkeye fan and enjoyed watching all college football games. He will be greatly missed by all who knew and loved him. Dick is survived and lovingly remembered by his two sons, Dennis (Linda) Krog of Marion and John (Laura) Krog of Shellsburg, Iowa; seven grandchildren including Adam Krog of Central City; 16 great-grandchildren; sister, Marie Lee of Rockwell, Iowa; and several nieces and nephews. He was preceded in death by his parents, Waldemar and Myrtle Krog; wife, Marylyn; and two brothers, Waldemar Jr. and Warren Krog. In lieu of flowers, memorials in Dick’s memory may be directed to St. Paul’s Lutheran Church in Marion.

The family of Richard "Dick" Edmund Krog created this Life Tributes page to make it easy to share your memories.

Send flowers to the Krog family.