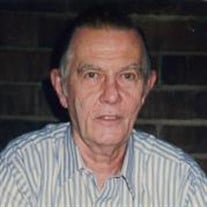 Richard J. “Dick” Wilford, 87, of Cedar Rapids, Iowa, died Tuesday, March 15, 2022. A private family graveside service will take place at the Linwood Cemetery Mausoleum in Cedar Rapids. Murdoch-Linwood Funeral Home & Cremation Service in Cedar Rapids is assisting the family. Dick was born August 29, 1934, in Davenport, Iowa, the son of Harry James and Dorothy Lillian (Pease) Wilford. He graduated from Wilson High School, Class of 1952. Dick served in the United States Navy on the USS NavRecSta Nova during the Korean conflict. He married Charlotte Joffe on April 19, 1956, in King, Georgia. Dick worked as a water well pump specialist for Cedar Rapids Pump, Iowa Pipe & Supply, and then owned and operated Wilford’s Water & Well until his retirement in 2015. He was a member of the Iowa Water Well Association. Dick loved fishing. He was a loving husband, father, and grandfather who will be missed by those who love him. Survivors include his children, Ken (Karen) Wilford of Cedar Rapids, Richard A. Wilford of Chicago, Illinois; grandchildren, Kraig (Heather) Wilford, Kevin (Deann) Wilford, and Kory (Tori) Wilford; great-grandchildren, Gabby, Aurora, Ella, Braxton, Kynleigh, Levi, Konnor, Leo, and Kai; and brother, William (Donna) Wilford of Swisher, Iowa. He was preceded in death by his parents, Harry and Dorothy Wilford; wife, Charlotte Wilford in 2018; and sister, Beverly Wilford. Memorials may be directed to the family, the American Diabetes Association, or the Meth-Wick Endowment Fund. The family would like to extend a special thank-you to the staff at the Meth-Wick Community for their loving care of Richard.

The family of Richard 'Dick' J. Wilford created this Life Tributes page to make it easy to share your memories.

Send flowers to the Wilford family.