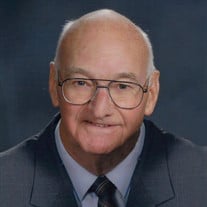 Richard “Dick” P. Jeffery Jr., 89, of Quasqueton, Iowa, passed away on Saturday, January 15, 2022, surrounded by his family. Dick’s wishes were to donate his body to help others through the University of Iowa, Department of Anatomy and Cell Biology, Deeded Body Program for medical education and research. A private celebration of Dick’s life will be held at a later date. Murdoch Funeral Home & Cremation Service of Marion is assisting the family. Dick was born on November 9, 1932, in Lemont, Illinois, the son of Richard and Daisy (Pickett) Jeffery. He graduated from the University of Illinois with a degree in mechanical engineering. Dick married his first wife Rosalea Drysch in 1955, and she preceded him in death in 2002. He later married Patti (Sauer) Townsend on July 16, 2005. Dick enjoyed fishing, hunting, going south over the winters to Texas, playing board games and card games, and spending time with his friends and family. He was an avid reader throughout his life and enjoyed reading Western books in his later years. Dick was always down for a good game of pool with the grandchildren. He had a successful career working as a Mechanical Engineer for Chicago Blower Corporation and working his way up to Vice President of the company. Dick served valiantly in the United States Army until he was honorably discharged. Dick was a lover of the outdoors, nature, and enjoyed working outside. He will be greatly missed by all who knew and loved him Dick is survived and lovingly remembered by his wife, Patti Jeffery; son, Richard (Debbie) Jeffery III; two granddaughters, Heather (Tim) Jubber and Kelly Jeffery; three stepchildren from his marriage to Patti, Tari (Mike) Robertson, LaDonna Jindrich, and Tim (Lori) Townsend; four step-grandchildren, Aly (Nick) Ciesielski, Gabe Robertson, Will Townsend, and Alexandria Townsend; and one step-great-grandchild, Wyatt Ciesielski. He was preceded in death by his first wife, Rosalea Jeffery; parents, Richard and Daisy; and two sisters.

The family of Richard "Dick" P. Jeffery, Jr. created this Life Tributes page to make it easy to share your memories.

Send flowers to the Jeffery, family.