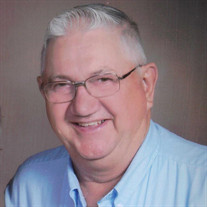 Richard A. Weber, 76, of Central City, Iowa, passed away on March 1, 2022, at the Dennis and Donna Oldorf Hospice House of Mercy, surrounded by his wife and children. In accordance with his wishes, cremation has taken place. Family will greet friends and family from 4:00 to 7:00 p.m. on Friday, March 4, 2022, at Murdoch Funeral Home & Cremation Service in Central City. A Funeral Mass will be held at 10:30 a.m. on Saturday, March 5, 2022, at St. Stephen’s Catholic Church in Central City, with Reverend Nick March officiating. A private committal service will take place at a later date at Mt. Clark Cemetery in Central City. Richard was born in Elkader, Iowa, on June 8, 1945, the son of the late Lawrence and Mary (Erdman) Weber. He attended school in Monti and Troy Mills, Iowa, and worked on the family farm. Richard moved to Cedar Rapids, Iowa in 1963, where he met his future wife, Janet, at a laundromat. Richard and Janet were united in marriage on July 2, 1966. Richard worked at Wilson's Packing Plant and later, Iowa Manufacturing/ Terex, where he retired after 43 years. Following retirement, he continued working at the Marion Hy-Vee for several years. Richard was a very hard worker, loved spending time with his family, and when he was able, enjoyed hunting, fishing, and being outdoors tinkering on anything that might need tinkered with. He will be greatly missed by all who knew and loved him. Richard is survived and lovingly remembered by his wife of 55 years, Janet Weber of Central City; four children, Tracy (Tom) Casey of Hiawatha, Iowa, Trish (Dennis) Carkhuff of Newton, Iowa, Steve Weber of Cedar Rapids, and Kassie (Matt) Docker of Marion, Iowa; eight grandchildren, Nikole (Drew) Tucker, Connor Carkhuff, Scott Carkhuff, Chuck (Brenda) Carkhuff, Sarah Hummel, Shaun Hesson, Colin Docker and Emersyn Docker; four great-granddaughters, Rylee Tucker, Payton Carkhuff, Teagan Carkhuff and Lexi Carkhuff; siblings, Wayne Weber, Marvin (Judy) Weber, Bev Voelker, Gene (Marsha) Weber, and Delbert (Mary) Weber; and many nieces, nephews, and friends. He was preceded in death by his parents; and siblings, Lester Weber, Ralph Weber, and Lorraine Klostermann.

Richard A. Weber, 76, of Central City, Iowa, passed away on March 1, 2022, at the Dennis and Donna Oldorf Hospice House of Mercy, surrounded by his wife and children. In accordance with his wishes, cremation has taken place. Family will greet... View Obituary & Service Information

The family of Richard A. Weber created this Life Tributes page to make it easy to share your memories.

Send flowers to the Weber family.