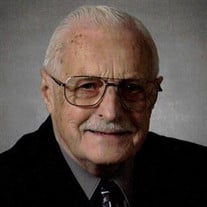 Robert “Bob” Harold Sippel, 91, of Marion, Iowa, formerly of Dubuque, Iowa, passed away unexpectedly on Saturday, October 23, 2021, at St. Luke’s Hospital in Cedar Rapids, Iowa. Visitation will be held from 11 a.m. to 1 p.m. on Friday, October 29, 2021, at Marion Christian Church, located at 1050 McGowan Boulevard, in Marion. Funeral services will follow at 1 p.m. on Friday, at the church, with Pastor Bryce Bowers officiating. Face masks are mandatory for all guests. Burial with military rites will follow at Cedar Memorial Park Cemetery in Cedar Rapids. Murdoch Funeral Home & Cremation Service of Marion is assisting the family. Bob was born on August 26, 1930, in Dubuque, Iowa, the son of Harold and Martha (Saugi) Sippel. He was a graduate of Dubuque Senior High School and went on to attend The University of Dubuque. Bob served in the United States Marine Corps for two years, during the Korean Conflict. He worked at the American Trust & Savings Bank in Dubuque for 14 years, prior to joining Farmers State Bank in Marion, in June of 1967. Bob also attended the Graduate Degree School of Banking in Madison, Wisconsin, and Ag Credit School in Ames, Iowa. On October 19, 1974, he was united in marriage to Pamela “Pam” K. Schloeman at the Little Brown Church, in Nashua, Iowa. They made their home in Marion. For more than 55 years, Bob was employed with Farmers State Bank, retiring as Senior Vice President and CEO. He continued to work part-time even after his retirement. Bob was appointed to the Board of Directors of Farmers State Bank, in November of 1980, and was still actively serving. In addition to being very influential at Farmers State Bank, Bob served as President of the Marion Chamber of Commerce, and as a board member, chairman or on the Board of Directors to various organizations including: the Cedar Rapids - Marion Chamber of Commerce; Cedar Rapids - Marion Homebuilders Association; Real Estate Advisory Committee to the Marion City Council; City of Marion as well as Cities Appraisal Committee; Marion Christian Church; IBMC in Des Moines, Iowa; Marion East Cedar Rapids Rotary Club; United Way; the Police and Firemen Retirement Board; and the Capital Fund Drive for both the Cedar Rapids Library and YMCA. Bob enjoyed holiday baking, singing, following the Chicago Cubs, Chicago Bears, the Green Bay Packers, Iowa Hawkeyes and working in his yard. He and Pam spent some of their time traveling with the FSB Bank Travel Club and going to Florida. Bob was a loyal fan of his grandchildren and loved attending their sporting events, as well as spending time with his family and friends, including dinners at the former Long Branch. Bob will be greatly missed by all who knew and loved him. Bob is survived and lovingly remembered by his wife of 47 years, Pam of Marion; six children, Pamela (Gary) Mootz of Hazel Green, Wisconsin, Judy Buss (fiancé, Dr. Stephen Clifford) of Sherrill, Iowa, Ann (Rick Fens) Drexler-Fens of Dubuque, Cindy Severide of Tiffin, Iowa, Scott (Pam) Sippel of Dubuque, and Shauna (Tony) Kendall of Cedar Rapids; grandchildren, Jamie Davis (John), Brian Buss (Ivy), Heather (Casey) O’Mara, Tyler Sippel, Trevor Sippel, Jaime Severide, Payton Kendall, Teagan Kendall, Reese Kendall, and Eva Kendall; two great-grandchildren, Carson O’Mara and Sophia Buss; and niece, Susan (Charlie) Schober. He was preceded in death by his parents; sister, Ruth Louden; and one grandson, Derrek Dexler. In lieu of flowers, the family has respectfully requested that any memorials in Bob’s memory be directed to Marion Christian Church for the Choir Music Fund.

The family of Robert "Bob" H. Sippel created this Life Tributes page to make it easy to share your memories.

Send flowers to the Sippel family.