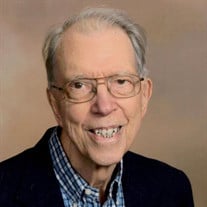 Robert “Bob” Joseph Stone, 90, of Marion Iowa, died Sunday, May 9, 2021. In accordance with his wishes, cremation will take place. Due to the pandemic restrictions, a private memorial service for family will be held at First Presbyterian Church, Marion, Iowa. Inurnment will follow at Oak Shade Cemetery in Marion. All family members are respectfully requested to wear a face mask and practice social distancing. Bob was born July 12, 1930, in Cedar Rapids Iowa. Bob married Marjorie F. (Lala) Taylor in Marion, Iowa, on August 6, 1960. They had three children, Wilford H. Stone (Amy L. Reasner), Diane L. (Gordon) Origer and Jeffrey C. (Kim Stone Vilim) Stone. There are also four grandchildren, Malissa Jeffrey, Marcus Origer, Anna Stone, and Kayla Stone; two step-grandchildren, Mindy (Travis) Brechwald and Michelle (Justin) Frideres; and eight great-grandchildren, Chris and Harrison Jeffrey, Kacie, Kaiya, and Kallie Brechwald, and Grady, Jaycie and Gage Frideres. Bob graduated from Roosevelt High School in 1948, Coe College in 1952, and the University Of Iowa College Of Law in 1957. He served on active duty in the United States Air Force from 1952-1954, during the Korean War, and in the Air Force Reserve until 1960, when he received an honorable discharge as a Captain. Bob joined Winfield White in the practice of law in Marion, Iowa, in July, 1957, and retired in July, 1997. He served as the city of Marion’s City Attorney from 1964 to 1976. He was president of the Linn County Bar Association from 1988-1989 and the Iowa Municipal Attorneys Association in 1973-1974. He served as a volunteer in many community organizations including First Presbyterian Church as an elder and deacon, and was a thirty year member and volunteer at the National Czech and Slovak Museum and Library (NCSML). Memorials may be directed to the First Presbyterian Church in Marion for its “One Great Hour of Sharing,” the NCSML, and the Marion Public Library. Bob was a patient and kind-hearted husband, father and grandfather, who shared his love of reading with all who knew him. He will be deeply missed.

Robert &#8220;Bob&#8221; Joseph Stone, 90, of Marion Iowa, died Sunday, May 9, 2021. In accordance with his wishes, cremation will take place. Due to the pandemic restrictions, a private memorial service for family will be held at First Presbyterian... View Obituary & Service Information

The family of Robert "Bob" Joseph Stone created this Life Tributes page to make it easy to share your memories.

Send flowers to the Stone family.