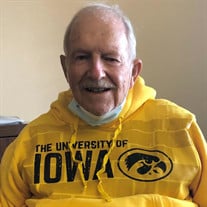 Robert “Bob” Leo Turkal, 90, of Cedar Rapids, Iowa, passed away Monday, June 20, 2022, at West Ridge Care Center in Cedar Rapids. Memorial Gathering: 2 – 5 p.m. Saturday, June 25, 2022, with Military Honors at 3:30 p.m., at The Legacy Center at Murdoch-Linwood in Cedar Rapids. Burial will be at Linwood Cemetery in Cedar Rapids at a later date. Bob was born November 12, 1931, in Solon, Iowa, the son of Robert John and Daisy (Sharf) Turkal. He honorably served his country in the United States Air Force from 1951 – 1955, during the Korean Conflict. Bob was united in marriage to Sherrill Carter on November 8, 1970, in Cedar Rapids. He started out as a barber for 20 years and then worked at FMC for 15 years. Bob retired from Duane Arnold after 12 years of service. He was a member of the American Legion Post #376 in Walker, Iowa. Bob enjoyed hunting, fishing, and had a passion for taking care of the family cabin property. Survivors include his wife, Sherrill Turkal of Cedar Rapids; son, Scott (CindyJo) Turkal; grandchildren, Natalie (Turkal) Stocker and her husband Jonathan; great-grandchildren, Daisy and Jack; and nieces and nephews. Bob was preceded in death by his parents and his sister, Irene Freeman. Memorial donations may be directed to the Eastern Iowa Honor Flight, Parkinson’s Foundation, or an organization of your choice.

The family of Robert 'Bob' Leo Turkal created this Life Tributes page to make it easy to share your memories.

Send flowers to the Turkal family.