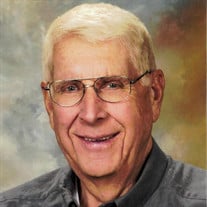 Robert Wahlert, 79, of Walford, Iowa, passed away peacefully surrounded by his family on Thursday, March 31, 2022, at St. Luke’s Hospital in Cedar Rapids, Iowa. Visitation: 3 – 5 p.m. Sunday, April 10, 2022, at Cedar Hills Community Church in Cedar Rapids. Funeral Service: 11 a.m. Monday, April 11, 2022, at the church. Private family burial will take place at Linwood Cemetery in Cedar Rapids. Murdoch-Linwood Funeral Home & Cremation Service in Cedar Rapids assisted the family. Rob was born on October 10, 1942, at home on the farm in Exira, Iowa, the son of George and Margery (Artist) Wahlert. After high school, Rob completed two years of business college. On October 19, 1963, Rob was united in marriage to Raydell Crees in Exira. He was a flight instructor and charter pilot from 1966 – 1970. Rob then worked the next 26 years at the Eastern Iowa Airport as an air traffic controller. During his retirement, he enjoyed golfing and stayed active in woodworking for 30 years. Rob was always helpful and handy. He even assisted building his own house as well as homes of several friends. Rob was a big Iowa Hawkeye sports fan. Above all, Rob’s biggest joy was his grandkids. He attended as many activities as he could from dance recitals to sporting events. Rob and Raydell were longtime members of Cedar Christian Church until the flood of 2008. There Rob served as a deacon and church greeter and was a member of the property committee. They then became members of Cedar Hills Community Church. He and Raydell enjoyed serving coffee and cookies as part of the greeting committee and attending small group Bible studies. Rob will be dearly missed by those who knew and loved him. Survivors include his wife, Raydell Wahlert of Walford, children, John (Robin) Wahlert of Johnston, Iowa, Paul (Laurie) Wahlert of Fairfax, Iowa and Shari (Rion) Schwarz of Walford, Iowa; grandchildren, Ashley (Derek) Tapps, Amber (Ben) Baessler, Kristin Wahlert, Abby Wahlert, Dylan Schwarz, and Jake Wahlert; and great-grandchildren, Jay and Cora Tapps, and Roman and Owen Baessler. Rob was preceded in death by his parents, George and Margery Wahlert; and siblings, Shirley Schlater, Ruth Jessen, Mary Lomeland. Memorials may be directed to the Cedar Hills Community Church or the American Cancer Society.

The family of Robert Wahlert created this Life Tributes page to make it easy to share your memories.

Send flowers to the Wahlert family.