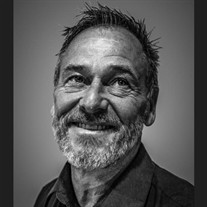 Robert James Way, 55 of Mt. Vernon, Iowa, passed away Monday, June 13, 2022. Visitation will be held from 9 – 11 a.m. on Tuesday, June 21, 2022, at Murdoch-Linwood Funeral Home & Cremation Service in Cedar Rapids, Iowa. The Funeral Service will immediately follow at 11 a.m. at the funeral home. Burial will be held at Linwood Cemetery in Cedar Rapids. The family would like to invite everyone to join them in continuing the celebration of Robert’s life at the American Legion Post #298 in Marion, Iowa, immediately following burial. Robert was born August 15, 1966, in Cedar Falls, Iowa, the son of James and Beverly (Liddell) Way. He graduated from Cedar Falls High School in 1985. Robert proudly and honorably served his country for nine years. He was a Green Beret for the United States Army Special Forces. Robert was a talented arborist for over 30 years and owned One World Tree Service. Often you could find Robert carving and making creative woodwork on left over material from the workday. He was an outdoorsman who loved to fish and always made people laugh. Survivors include his significant other, Melissa Atteberry; children, Aaron (Morgan) Way, Kirsten Way (Chad Phillips), Seth (Kelsey) Hill, Allie, Paxton, and Princeton; siblings, Keri (Alan) Mast, Ronald Way, Tammy Way, Alan Knock, and John Knock; and grandchildren, Brooke Way, Braylin, Cayson, Braxtyn, Kynzlee, and Shylah. He was preceded in death by his parents, James and Beverly, and brother, John Nelson. Memorials may be directed to the family.

The family of Robert James Way created this Life Tributes page to make it easy to share your memories.

Send flowers to the Way family.