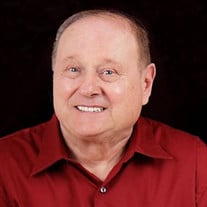 Robert “Bob” William Woerdehoff, 77, of Marion, Iowa, passed away on Tuesday, March 23, 2021, surrounded by his loving family. Due to the Covid-19 pandemic, a service for only the family will be held at Murdoch Funeral Home & Cremation Service in Marion. A private committal service will take place at a later date at Memory Gardens Cemetery in Iowa City, Iowa. Bob was born on January 9, 1944, the son of Clifford and Elizabeth (Otting) Woerdehoff. He grew up in Cascade, Iowa, with his four siblings; Ronald Woerdehoff, Jane (Clifford) Strang, Joan Topping, and Richard Woerdehoff. After graduating from St. Mary’s High School in Cascade, Bob joined the United States Navy, where he proudly served our country. He met his devoted wife and best friend, Margaret “Peggy” Callahan, of 51 years, in Cascade, where they raised their five children; Angela (Mannie Gomes), Michele (Jim Barton), John, Brenda (Jeff Kadlec), and Brian (Fiorella). Bob worked and retired from John Deere Dubuque Works after 30 year of service. During that time he was a UAW member. After retirement, Bob was free to serve his community in a larger capacity. After many years as a legioner, he became the commander of the American Legion Post 528 in Cascade, one of his greatest honors, Not only was Bob a legioner, he was also a Knights of Columbus member for the majority of his adult life. His greatest legacy would be his nine grandchildren; Samantha Strauss, Jessica Strauss, William Gomes, Katherine Gomes, Bailey Kadlec, Jacob Kadlec, Luke Woerdehoff, Justin Garcia, and Kaylin Woerdehoff. Robert enjoyed watching racing and attended the Daytona 500, the Brickyard 400, the Rolex 24, and the Indy 500 seventeen years in a row. He was an avid concert goer with his wife, Peggy, and loved listening to old country and rock n’ roll music. Bob loved working on his cars, going to the casinos, watching the Iowa Hawkeyes play football or basketball, and following the Chicago Cubs. One of his favorite things to do was traveling to visit his children that lived in Florida, Tennessee, and Texas, and taking family vacations. Bob was known as someone who worked hard, was dedicated to his family, and always gracious. He will be greatly missed by all who knew and loved him. His family would like to express their sincere gratitude to Dr. Matthew Fox and the staff with Hospice of Mercy for the loving care and compassion they gave to Bob during his illness. In lieu of flowers, memorials in Bob’s memory may be directed to the Mercy Foundation for Mercy Hospice at 701 10th Street SE, in Cedar Rapids, Iowa, 52403.

Robert &#8220;Bob&#8221; William Woerdehoff, 77, of Marion, Iowa, passed away on Tuesday, March 23, 2021, surrounded by his loving family. Due to the Covid-19 pandemic, a service for only the family will be held at Murdoch Funeral Home & Cremation... View Obituary & Service Information

The family of Robert W. Woerdehoff created this Life Tributes page to make it easy to share your memories.

Send flowers to the Woerdehoff family.