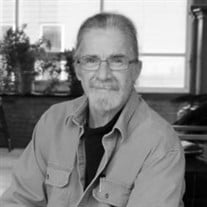 Roger Hadley, 73, of Cedar Rapids, Iowa, died Friday, January 21, 2022. Services will be held at a later date. Murdoch-Linwood Funeral Home & Cremation Service in Cedar Rapids is assisting the family. Roger was born March 18, 1948, in Eldora, Iowa, the son of Robert and Ethel (Whitmore) Hadley. He graduated from LaPorte City High School, Class of 1966. Roger went on to attend the University of Northern Iowa, where he obtained his Bachelor’s degree in Industrial Arts, and Iowa State University, where he obtained his Bachelor’s degree in Architecture. He owned and operated Change Environmental Architecture & Planning. Roger was a member of the National and Iowa Chapters of the American Institute of Architects, a founding member of the Iowa Solar Energy Association in 1978, and chairperson for the Habitat for Humanity Committee at St. Paul’s Methodist Church from 1994-95. He was the recipient of the Award of Design Excellence given by the 1999 Children's Jury, Iowa Chapter, American Institute of Architects, for his design of the Quad City Botanical Center in Rock Island, Illinois. Roger served in multiple city organizations and appointments. He brought people together through the love of the historic architecture of the Warehouse on 3rd Street in Cedar Rapids. Roger enjoyed fishing, being outdoors, and riding his Harley Davidson motorcycles. He was a member of St. Paul’s United Methodist Church in Cedar Rapids. Roger loved his dogs and had many throughout his lifetime. He had many beloved friends throughout the Midwest. Above all else, Roger was passionate about his family – they were his everything. Survivors include his children, Kelly (Michael) Bohning and Jason (Amy) Hadley; grandchildren, Brandon (Lauren) Bohning, Benjamin (Jessica) Bohning, Dylan Hadley, and Keegan Hadley; great-grandchildren, Whitmore and Eleanor; brother, Rick (Betsy) Hadley; and first wife, Linda Hadley. He was preceded in death by his parents, Robert and Ethel Hadley; and wife, Vicki Hadley.

The family of Roger Hadley created this Life Tributes page to make it easy to share your memories.

Send flowers to the Hadley family.