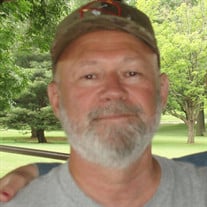 Roger W. Marconi, 74, of Bertram, Iowa, passed away suddenly from cancer on Sunday, April 10, 2022, at his home. In accordance with his wishes, cremation has taken place. A celebration of Roger’s life is being planned and will be announced at a later date. Roger was born on June 1, 1947, in James City, Pennsylvania, the son of John Anthony and Elizabeth “Betty” Louise (Cummings) Marconi. He was a 1963 graduate of Kane High School in Kane, Pennsylvania. Roger went on to serve honorably in the United States Army. He then attended School for Electrical Engineering in Miami, Florida, where he received his degree. Roger was united in marriage to Patti Brody in 1990, in Cedar Rapids, Iowa. He worked for Collins Radio for a short time, and then at Intermec (Norand), retiring after 29 years. Roger was a family member of Antioch Christian Church in Marion. Roger was an avid deer hunter and made long bows for himself and his friends. In recent years, he earned his Amateur radio license (KFØGLD), and shared this hobby with his son, Chris. Roger enjoyed talking on the radio daily and met many new friends. He loved spending time with all of his family. Roger was always there for family and friends and anyone needing help. He was very social and loved talking with people. Roger will be greatly missed by all who knew and loved him. Roger is survived and lovingly remembered by his wife, Patti Marconi of Bertram; three sons, Brian Marconi of Cedar Rapids, Chris Marconi of Norway, Iowa, and Christian Robertson of Bertram; three daughters, Terri Mahoney of Cedar Rapids, Christine Sauter (Matt) of Delhi, Iowa, Mandy Robertson (Cedric) of Cedar Rapids; nine grandchildren; six great-grandchildren; sister, Anita (Karl) Reitter of Fort Lauderdale, Florida; brother, John (Betsy) Marconi of Kane; and many nieces and nephews. He was preceded in death by his parents, John and Betty Marconi; brother, Henry Marconi; daughter-in-law, Roxane (Burke) Marconi; and his faithful dog, “Harley”. Memorials in Roger’s memory may be directed to Antioch Christian Church at 433 Cross Road in Marion, Iowa, 52302.

Roger W. Marconi, 74, of Bertram, Iowa, passed away suddenly from cancer on Sunday, April 10, 2022, at his home. In accordance with his wishes, cremation has taken place. A celebration of Roger&#8217;s life is being planned and will be announced... View Obituary & Service Information

The family of Roger W. Marconi created this Life Tributes page to make it easy to share your memories.

Send flowers to the Marconi family.