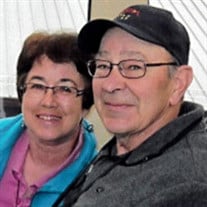 Ronald “Ron” Lee Debus, 74, of Marion, Iowa, passed away on Sunday, August 8, 2021, at The Views of Marion. There will be no visitation held. Graveside services will be held at 11 a.m. on Saturday, August 14, 2021, at Rampton Cemetery in rural Dysart, Iowa. Murdoch Funeral Home & Cremation Service in Marion is assisting the family. Ron was born on February 17, 1947, in Lansing, Michigan, the son of Herman and Marie (Harris) Debus. He was a 1965 graduate of Lansing High School. Ron went on to earn a degree from DeVry Institute of Technology. From there, he was employed with Collins Radio as a Test Technician. In 1969, Ron joined the United States Army, where he honorably served during the Vietnam War, until he was honorably discharged in 1971. Ron was united in marriage to the love of his life, Linda Kae Losenicky on May 15, 1971, in Dysart, Iowa. Ron was a member of the American Legion Post 298 of Marion. He later retired from Collins Radio after many years. After retirement, he put together hundreds and hundreds of model cars and planes and completed jigsaw puzzles. Ron also enjoyed researching cars and Hawaii, where he and his wife, Linda traveled to five times. They also traveled with their special friends, Kirk and Gini Hayes to Washington D.C., Alaska, and Hawaii. Ron enjoyed watching NASCAR, movies, and DVDs with Linda. He enjoyed their daily lunch dates. He is survived and lovingly remembered by his sister-in-law, Sharon (Duane) Carpenter and their family of Cedar Rapids; special friends, Gini (Kirk) Hayes and their family of Central City; and his beloved cat, “Elvis”. Ron was preceded in death by parents, Herman (Marie) Debus; sister and brother-in-law, Jan (Dick) Switzer; father-in-law and mother-in-law, Albert and Bea Losenicky; his wife and love of his life for 50 years, Linda Debus who passed on August 2, 2021. In lieu of flowers, memorials may be directed to Marion American Legion Post 298, Hospice of Mercy or Alzheimer’s Research Foundation.

The family of Ron Lee Debus created this Life Tributes page to make it easy to share your memories.

Send flowers to the Debus family.