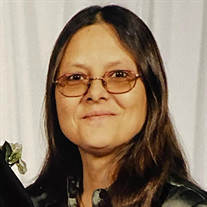 Ronda R. Holub, 60, of Prairieburg, Iowa, passed away on Monday, December 28, 2020, at Mercy Medical Center in Cedar Rapids, Iowa, after a short battle with cancer. The family will greet friends from 2 -5 p.m. on Sunday, January 3, 2021, at Murdoch Funeral Home & Cremation Service in Central City, Iowa. Inurnment will take place next to her husband at Boulder Cemetery near Prairieburg at a later date. All guests are respectfully requested to wear a face mask and practice social distancing. Ronda was born February 12, 1960, in Cedar Rapids, the daughter of Fay Edgerly and Carol Colbert. On May 19, 1979, in Cedar Rapids she was united in marriage to Mark Holub. Ronda worked in the kitchen at the Abby Center for several years, babysat her grandsons when they were young, and worked at Lindley Locker in Center Junction. She loved to hunt and trap with Mark, her son and grandsons. She is survived by her son, Brad (Larissa) Holub of Anamosa, Iowa; three grandsons, Gavin, Baylor and Carter Holub; three sisters, Marcee (Mark) Lindley of Central City, Emma Hartwig of Anamosa, and Fayrene (Allen) Sinn of Williamsburg, Iowa; one brother, William (Marnie) Edgerly of Traer, Iowa; step-mother, Esther Stick of Cedar Rapids; several brothers-in-law and sisters-in-law; numerous nieces and nephews; and numerous great nieces and nephews. Ronda was preceded in death by her parents; husband, Mark Holub on April 27, 2020; grandson, Bryer Holub; and two brothers-in-law, Randy Hartwig and Kurt Holub. Memorials in Ronda’s memory may be directed to her family to be designated at a later date.

Ronda R. Holub, 60, of Prairieburg, Iowa, passed away on Monday, December 28, 2020, at Mercy Medical Center in Cedar Rapids, Iowa, after a short battle with cancer. The family will greet friends from 2 -5 p.m. on Sunday, January 3, 2021, at... View Obituary & Service Information

The family of Ronda R. Holub created this Life Tributes page to make it easy to share your memories.

Send flowers to the Holub family.