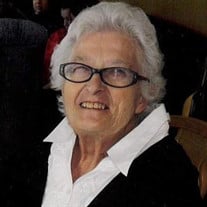 Rosalee E. Coghlan, 82, of Marion, Iowa, passed away on Wednesday, December 9, 2020, at Cedar Manor Nursing Home in Tipton, Iowa. Per her wishes, there will be no public services. A private family funeral service will be held on Friday, December 11, 2020, at Murdoch Funeral Home & Cremation Service in Marion, Iowa. Burial will take place at Oak Shade Cemetery in Marion. Rosalee was born on December 29, 1937, in New Boston, Iowa, the daughter of Walter and Iva (Bell) Slater. She was the youngest of ten children. After graduating from high school, Rosalee attended Keokuk Community College and earned her teaching degree. She went on to teach for the Marengo, Lisbon, and Marion school districts. On June 5, 1960, Rosalee was united in marriage to Ronald D. Coghlan and moved to Marion, Iowa, where they raised their family. Rosalee left teaching to focus on her family, returning to work in 1975. She began teaching preschool at Kiddies Corner Daycare and Preschool in Marion until it closed. Rosalee then began her own in home daycare. She had a positive impact on hundreds of children. Rosalee loved her family and will be lovingly remembered by all who knew and loved her. Rosalee is survived and lovingly remembered by her four children and their families, Rhonda (Mike) Taylor of Tipton, and their children, Adam (Megan), Hollee (Jeremy), Michele, Erik, Gina (Cody), Cory, and B. Hayden, Bob (Melinda) Coghlan of Quasqueton, Iowa, and their children, Allison, Aaron, Veronica, and Nile, Shelley (John) O’Neill of Marion and their children, Elaina (Elliott), Shane, and Abby, Kyle (Shannon) Coghlan of Marion and their children, Kaitlyn, Caleb, and Jakob; seven great-grandchildren, Emily, Ava, Kingsley, Konrad, Kilian, Kohen, Kennedy, and a great-grandson due in March; one brother, Marvin (Betty) Slater of Keokuk, Iowa; one sister, Garnett (Harold) Swanson of Burlington, Iowa; sister-in-law, Carolyn (Larry) Glandon of State Center, Iowa; brother-in-law, Robert (Jackie) Coghlan of Lindhurst, Illinois, and many nieces and nephews. She was preceded in death by her husband, Ron Coghlan; parents, Walter and Iva Slater; five sisters, Edythe Barnes, Violet Beckett, Ruby Foley, Ruth Ina Anderson, and Elberta Lang; and two brothers, Walter and Vinton Slater. Rosalee’s family wishes to thank her healthcare team for the exceptional care given. Andrea Wulf, ARNP, Lindsay and the team of Above and Beyond Hospice Care and the incredible staff at Cedar Manor Nursing Home in Tipton for the love and care shown to mom. There are angels among us. Memorials in Rosalee’s memory may be directed to Murdoch Funeral Home & Cremation Service at 3855 Katz Drive in Marion, Iowa, 52302, attention to Rosalee’s family.

Rosalee E. Coghlan, 82, of Marion, Iowa, passed away on Wednesday, December 9, 2020, at Cedar Manor Nursing Home in Tipton, Iowa. Per her wishes, there will be no public services. A private family funeral service will be held on Friday, December... View Obituary & Service Information

The family of Rosalee E. Coghlan created this Life Tributes page to make it easy to share your memories.

Send flowers to the Coghlan family.