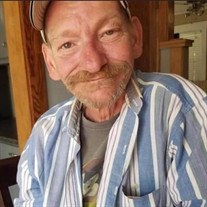 Russell “Russ” Lynn Brecht, 60, of Walker, Iowa, passed away on Sunday, January 3, 2021, at the Dennis and Donna Oldorf Hospice House of Mercy in Hiawatha, Iowa. A celebration of Russ’ life will be held at a later date. Murdoch Funeral Home & Cremation Service of Marion, Iowa, is assisting the family. Russ was born on February 15, 1960, in Cedar Rapids, Iowa, the son of George and Eva (Smock) Brecht. He was united in marriage to Jane Oellrich, they later divorced. Russ worked as a machinist. He loved being outdoors whether it be fishing, hunting, or just hanging out with his family and friends. He especially enjoyed being with his grandchildren. Russ will be greatly missed by all who knew and loved him. Russ is survived and lovingly remembered by his daughter, Jillian Brecht of Marion; four grandchildren, Britini (Andrew), Dakotah, Lantz, and Maddax; one great-grandchild, Jensen, and one on the way; four siblings, Susan, Mark (Sue), Peggy, and Brad (Cammie); and many nieces and nephews. He was preceded in death by his parents, George and Eva Brecht; and his son, Justin. In lieu of flowers, cards and memorials may be sent to Russ’s family in care of Murdoch Funeral Home & Cremation Service at 3855 Katz Drive in Marion, Iowa, 52302.

The family of Russell Lynn Brecht created this Life Tributes page to make it easy to share your memories.

Send flowers to the Brecht family.