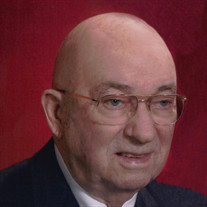 Russell J. Rhoads, 96, of Marion, Iowa, died on Wednesday, June 15, 2022, from cancer. Visitation will be held from 9:30 to 10:30 a.m. on Monday, June 20, 2022, at Murdoch Funeral Home & Cremation Service in Marion, with a celebration of life at 10:30 a.m. He was born on April 9, 1926, to Russell and Ruth Rhoads. Upon returning from the Navy, he married Donna Lou Coppess. They farmed at Stanwood, Iowa until he worked as a rural mail carrier, upon retirement they moved to Marion, Iowa. Russell is survived and lovingly remembered by his son, Duane (Terry) Rhoads of Fairfax, Iowa; daughters, Judy (Fred) Weber and Trudy (Jack) Smith all of Marion; five grandchildren; and eight great-grandchildren. He was preceded in death by his parents; wife; and three grandchildren, McKeon and Wesley Weber, and Robert Russell Smith. Memorials in Russell’s memory may be directed to UnityPoint Hospice of St. Luke’s Hospital, 290 Blairs Ferry Road NE #100, Cedar Rapids, Iowa, or Camp Wyoming, 9106 42nd Ave, Wyoming, Iowa, 52362.

The family of Russell Jacob Rhoads Jr. created this Life Tributes page to make it easy to share your memories.

Send flowers to the Rhoads family.