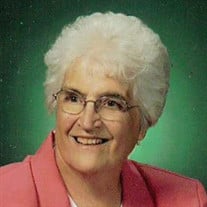 Ruth J. (Mithelman) Chrystal was born February 4, 1925, in Malcom, Iowa, the daughter of Elmer and Mable (Stephen) Mithelman. She passed away peacefully on September 18, 2021, at Hiawatha Care Center in Hiawatha, Iowa. A funeral service will be held at 11 a.m. on Thursday, September 23, 2021, at Center Point United Methodist Church, 275 Green Street West, Center Point, Iowa, with visitation one hour prior. Burial will take place at Walker Cemetery. Murdoch Funeral Home & Cremation Service of Marion is assisting the family. Ruth was a 1942 graduate of Center Point High School. On June 3, 1948, she was united in marriage to Gordon F. Chrystal, son of Frank and Aola (Burnside) Chrystal at Westminster Presbyterian Church in Cedar Rapids, Iowa. To this union four children were born. The couple farmed in rural Manchester and Coggon prior to moving to Walker, Iowa in 1960. Ruth was a homemaker and mother, and additionally worked alongside her husband in their construction business. In her later years she worked for Wal-Mart. She was a member of the Center Point United Methodist Church where she served as a UMW President for many years as well as on the Cedar Rapids UMW Board as an officer. During this time, she worked many hours making noodles and helping with the annual Chicken and Noodle supper. She was an active member of the American Legion Auxiliary #376 in Walker there she served as president of the unit and also as Linn County President. Ruth was a former member of Cono Center Presbyterian Church, playing the piano and organ there for twenty years. For many years she was a daily participant of the Center Point coffee group, attending until she was no longer able to do so, and has many friends from this group. Ruth is survived and lovingly remembered by one daughter, Patricia Akers of Walker; one son John (Janice) of Center Point; daughters- in-laws, Iris of Centralia, Missouri, and Janet of Cedar Rapids; 13 grandchildren; 24 great-grandchildren and one great-great-grandchild expected in January 2022; brother-in-law Alton Chrystal of Ankeny; and several nieces and nephews. She was preceded in death by her parents, her husband, Gordon in 1996; her sons David and Daniel; a grandson David Allen Jr.; her son-in-law, Donald Akers; two brothers, Harold, and Keith; two brothers-in-law; and five sisters-in-law. The family would like to thank the staff of Hiawatha Care Center for the loving care provided to Ruth during her stay there. In lieu of flowers, memorials may be sent to the family in c/o Pat Akers, PO Box 312, Walker, Iowa 52352.

Ruth J. (Mithelman) Chrystal was born February 4, 1925, in Malcom, Iowa, the daughter of Elmer and Mable (Stephen) Mithelman. She passed away peacefully on September 18, 2021, at Hiawatha Care Center in Hiawatha, Iowa. A funeral service will... View Obituary & Service Information

The family of Ruth Chrystal created this Life Tributes page to make it easy to share your memories.

Send flowers to the Chrystal family.