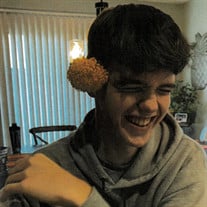 Samuel “Bammer” Raymond Duggan made his appearance in this world on June 4, 2004 in Fort Bragg, NC. He moved to Manchester six years ago. Both of his parents are originally from this area. Sammy walked his own path from Day 1. Nothing he did or said was “ordinary”, but it was always just the right thing at the time. Sam had big blue eyes and a contagious sense of humor. He would want it mentioned that he was “The World’s Best Bird Lawyer,” a lover of narwhals and that you should never turn your back on a chicken. Our family was lobbied by Sam for years to purchase an alpaca. Eventually we came to terms with the addition of a stuffed alpaca to our household. Sam had an old soul, and therefore a love of old rock music. The Beatles were a favorite of his. One of his favorite things to do was hit flea markets for old odds and ends with his “Papa”. He taught himself to play the guitar and the piano and he loved playing in his band with his friends. Sam was way ahead of his age when it came to conversation. He could explain the deep meanings of old songs, explain the plot of a Seinfeld episode off the top of his head, or argue the philosophical aspects of the universe. Sam liked to play Magick, The Gathering with friends, Chess, and any other game which involved strategy and he was good at them. He was never much of a sports guy, although he played nearly every sport at some point, he did like soccer though. Even though he was not a sports guy, Sam was oddly strong for a gangly 16 year old. His brothers often found out just how strong he was when they would hit a ticklish spot while wrestling him, which would result in them getting tossed through the air. Most importantly, Sam was kind. He loved everyone and everyone that met him loved him too and he will never be forgotten. Sam had a lifelong friend Myles Ponsar and many others. Unfortunately, Sam had an inner pain the rest of the world could not see. Sam’s burden became too much to bear and he lost his battle on Friday, March 19, 2021. He left many people behind to mourn his loss including; his mother, Danielle Haas of Ankeny, Iowa; his father and stepmother, Travis and Tanya Duggan of Manchester, Iowa; brothers, Alex Duggan of Ankeny, Iowa, Zach, Wesley, Teague and Kieran Duggan of Manchester, Iowa; fraternal twin sister and brother, Charlotte and Cyrus Turner of Ankeny; step brother, Parker Rife of Mondamin, Iowa; grandparents, Mary Duggan of Marion, Iowa and Sandy and Don Haas of Ankeny, Iowa; Step grandparents, Jim and Renee Small of Mondamin, Iowa, along with many aunts, uncles, nieces, nephews and friends. Words cannot begin to express how much we all miss Sam. He was preceded in death by his grandpa, JR Duggan; great-grandparents, Patricia Duggan, James Gravitt, Merle and Pearl Hansen. The family will greet friends from 5 to 8 p.m. Tuesday, March 30, 2021, at Bohnenkamp – Murdoch Funeral Home & Cremation Service. Funeral Mass will be held at 1:30 p.m. Wednesday, March 31, 2021, at St. Mary Catholic Church, Manchester. A livestream of the Mass may be accessed on the funeral home website tribute page for Sam, under “photos and videos or media” starting at 1:30 p.m. on Wednesday. All guests are respectfully requested to wear a face mask and practice social distancing at the Funeral Home and Church. All are invited to The Gathering Place, 1711 North 2nd Street, Manchester, following the Mass to hug and cry and to tell our best Sam stories. We invite anyone and everyone who was a part of Sam’s life to join us. The family appreciates everyone who has stepped forward and helped us in this time of need. Our family has taken some comfort in knowing that Sam’s choice to give the gift of organ donation has helped many others. He would be happy to know that. To anyone reading this, please hug your kids and tell them you love them. No matter how close any of us are to our kids, we never really know what burdens they carry inside. To those in need of counseling please reach out to the West Delaware School District for information or someone to talk to or visit www.suicidepreventionlifeline.org Please share a memory of Sam at www.murdochfuneralhome.com under obituaries.

Samuel &#8220;Bammer&#8221; Raymond Duggan made his appearance in this world on June 4, 2004 in Fort Bragg, NC. He moved to Manchester six years ago. Both of his parents are originally from this area. Sammy walked his own path from Day... View Obituary & Service Information

The family of Samuel Raymond Duggan created this Life Tributes page to make it easy to share your memories.

Samuel “Bammer” Raymond Duggan made his appearance in this world...

Send flowers to the Duggan family.