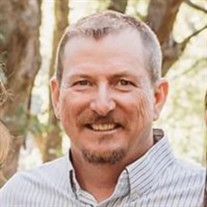 Scott Wayne Bird, 55, of Central City, Iowa, passed away on Sunday, October 17, 2021. A memorial visitation will be held from 1 - 4 p.m. on Sunday, October 24, 2021, at Murdoch Funeral Home & Cremation Service of Marion. A Celebration of Life will be held at a later date. Scott was born on March 9, 1966, in Cedar Rapids, Iowa, the son of Wayne and Ann (Priebe) Bird. He was raised in Independence, Iowa, with his two sisters and graduated from Independence High School in 1984. He went on to work construction for over 15 years before meeting the love of his life, Allyson. He started his own framing company, A&M Construction, in Mesa, Arizona in 2005. Scott and Allyson were fortunate to spend 21 loving and adventurous years together. They moved their family to Central City, Iowa, in 2009 where he started his love for farming. He loved throwing parties for his family and friends. Scott had many hobbies including camping, fishing, bowling, playing bags and listening to music. Scott loved his kids and spending time with his family. He will be greatly missed by all who knew and loved him. Scott is survived and lovingly remembered by his wife, Allyson of Central City; children, Ashton (Karley Dame) Bird of Rockford, Illinois, Mackenzie (fiancé, Cameron Lewis) Mann of Alburnett, Gabrielle Bird and Aiden Bird of Central City; grandson, Briar; mother, Ann Bird of Mesa, Arizona; mother-in-law, Janice Benedikt of Mesa, Arizona; sisters, Cindy Chappell of Mesa, Arizona, and Kandy (Jim) Halsey of Las Vegas, Nevada; brothers-in-law, Erik (fiancé, Shannon Wrobel) Benedikt of Ann Arbor, Michigan, and Anton Benedikt of Seattle, Washington; several nieces and nephews, aunts, uncles, cousins; and many good friends. He was preceded in death by his father, Wayne and father-in-law, Karl E. Benedikt. A memorial fund has been established in Scott’s name.

Scott Wayne Bird, 55, of Central City, Iowa, passed away on Sunday, October 17, 2021. A memorial visitation will be held from 1 - 4 p.m. on Sunday, October 24, 2021, at Murdoch Funeral Home & Cremation Service of Marion. A Celebration of Life... View Obituary & Service Information

The family of Scott Bird created this Life Tributes page to make it easy to share your memories.

Send flowers to the Bird family.