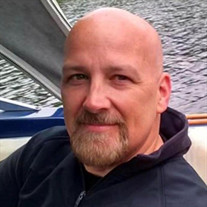 Sean Patrick Murphy, 60, of Marion, Iowa, passed away Wednesday, January 19, 2022, surrounded by his loving family and held firm in God’s arms. Sean is missed greatly by his family, including Maya who he was married to for 22 years, his sons Jaffer Elias, Levi Ralph, Samuel James and daughter Rael Shaun. He is survived by his stepfather; Fred Jones of Springfield Missouri. Sean was sixth in line of eight siblings: Curt (Janelle) Murphy, Melissa (Terry) Brodsack, Michael (Laurie) Murphy, Patricia Thomas, Erin (Russ) Fletcher, and Brian (Gwen) Murphy. He was the beloved uncle of thirty-six nieces and nephews, and great-uncle to their children. Preceding him in death are his parents, James Joseph Murphy, and Eva Jean Jones, and his younger brother, Jason Keith Jones. Sean Murphy was born in Manchester, Iowa on May 30, 1961. All his life, his unique sense of humor, quick wit and pun-generator mind kept people entertained. The word his brother Michael used to describe him as a kid was “livewire”. To keep him busy, his parents got him a drum set, launching him into a life of music and entertainment, earning him All-State honors as a young man and carving out a calling as lead singer, songwriter, drummer, and guitarist for many bands. He belted out the hits with Milk and Honey, inspired thousands of fans through the band, Fighter, and recently returned to a love of drumming with Strays. He also used his phenomenal musical gift to lead worship in many congregations. Sean has worked for many years in IT, and had the patience and talent to troubleshoot anything electronic. Around the house, Sean was an eternal putzer who would tackle projects and garage sales with friendly persistence. He enjoyed politics, sports, and especially cheering on his kids in all of their athletic endeavors. Sean bestowed the generous gift of his time, talent and friendship to everyone who knew him, ensuring a legacy that will thrive in myriad ways. Above all, his love for the Lord marked his life with purpose and a passion to lead others to find the security of a sincere faith in his Savior, Jesus Christ. In 2006, Sean and Maya adopted their three sons from Liberia, and soon after, their daughter Rael was born, completing their family. The eldest, Jaffer, said his dad sacrificed a lot to give him a chance at life. Sean followed his kids into many adventures, from sports to music. He and Levi could talk politics for hours. Sean taught Samuel to play drums and he and his daughter Rael shared a passion for singing and songwriting. He could be found on the soccer field, encouraging and videotaping his sons’ games, and was proud of their continued successes. A visitation will be held Monday, January 24 from 5-8 p.m. at Murdoch Funeral Home, 3855 Katz Drive, Marion, IA 52302. Celebration of life is Tuesday, January 25 at 10 a.m. at Cedar Valley Bible Church, 3636 Cottage Grove Avenue SE, Cedar Rapids, IA 52403. For those who cannot attend in person, livestream viewing will be available at www.cedarvalley.org. Longtime friend, Zach Blickens will be giving a message. In lieu of flowers, any gifts will be used in support of Sean’s children’s education and can be sent to the Murphy family at 2120 Robert Court, Marion, IA 52302.

Sean Patrick Murphy, 60, of Marion, Iowa, passed away Wednesday, January 19, 2022, surrounded by his loving family and held firm in God&#8217;s arms. Sean is missed greatly by his family, including Maya who he was married to for 22 years, his... View Obituary & Service Information

The family of Sean Patrick Murphy created this Life Tributes page to make it easy to share your memories.

Send flowers to the Murphy family.