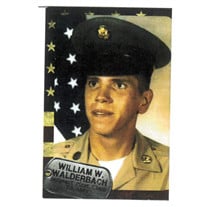 SFC William W. Walderbach, 64, of Cedar Rapids, Iowa, died Sunday, January 3, 2021, at his home. Private family services will be held at Murdoch-Linwood Funeral Home & Cremation Service, Cedar Rapids, with burial at the Iowa Veterans Cemetery in Adel, Iowa. All those attending are respectfully requested to wear a mask and practice social distancing.A livestream of the funeral service may be accessed on the funeral home website tribute page for William, under “photos and videos or media,” starting at 11 a.m. Thursday, January 7, 2021. William was born August 14, 1957, in Iowa City, Iowa, the son of James and Anne Walderbach. He was an Eagle Scout that graduated from Anamosa High School and The University of Iowa. William served his country honorably in the United States Army from 1977 until retirement in 1997, as an LPN. He married Debra Danielson on May 2, 1981, at Hope Lutheran Church. William was a member of Hope Lutheran Church, NRA, BSA Hawkeye Area Council and Swisher VFW. William adored his cats, Hillary and Hazel. He enjoyed woodworking and computers as well as watching movies and being a collector. William loved spending time with his grandkids and speaking to them over the phone. He will be missed but not forgotten. Survivors include his wife, Debra Walderbach of Cedar Rapids; children, Daniel (Shannon)Walderbach of Des Moines, Iowa and Lisa (Jacob) Starks of Nevada; grandchildren Sean and Rayne Walderbach and Amelia Starks; father, James (Donna) Walderbach of Cedar Rapids; siblings, Charles Walderbach and Mary (Marty) Shriver, all of Texas; Debra Pazour and Kurt Walderbach, both of Iowa; step-brothers, Joseph (Ramona) Walters of North Carolina and Craig Walters of Iowa; special niece, Samantha Schultz of Iowa; as well as many nieces, nephews, great-nieces, great-nephews and extended family. He was preceded in death by his grandparents; mother; step-brother, Jesse Walters; and half-sister, Arlene Walderbach. In lieu of flowers, memorials may be directed to the family.

The family of SFC William W. Walderbach created this Life Tributes page to make it easy to share your memories.

Send flowers to the Walderbach family.