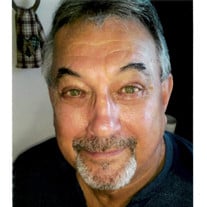 Slatko Haidin, 74, of Cedar Rapids, Iowa, died Monday, February 15, 2021. A visitation will be held from 2 – 5 p.m. on Friday, February 19, 2021, at The Legacy Center at Murdoch-Linwood in Cedar Rapids. All guests are respectfully requested to wear a mask and practice social distancing. Slatko was born on July 16, 1946, in Klagenfurt, Austria, the son of Saban and Regina (Janis) Haidin. He was united in marriage to Diane Wedge on April 24, 1966, in Cedar Rapids. Slatko served in the United States Air Force from 1965-1969 during the Vietnam War. He worked at Iowa Manufacturing for 43 years. Slatko loved to fish, hunt, and play softball. He enjoyed spending time at the cabin in Guttenberg. Slatko loved his friends at CJ’s. Survivors include his children, Holly Wolverton of Cedar Rapids, Hope (Robert) O’Bannon of Traverse City, Michigan, and Nick (Cassie) Haidin of San Antonio, Texas; six grandchildren; and six great-grandchildren. He was preceded in death by his parents, Saban and Regina Haidin; wife, Diane Haidin in 2013; and his brother, Henry “Hank” Haidin.

The family of Slatko Haidin created this Life Tributes page to make it easy to share your memories.

Send flowers to the Haidin family.