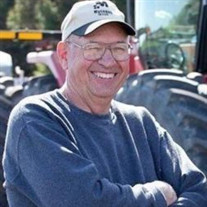 Stephen Martin, 74, of Springville, Iowa, went to be with his Lord on Wednesday, April 27, 2022, from injuries sustained in a fall. Family will greet friends and family from 3:00 to 7:00 p.m. on Monday, May 2, 2022, at the Lynn Dunn Memorial Building at the Linn County Fair Grounds in Central City, Iowa. A funeral service will be held at 10:00 a.m. on Tuesday, May 3, 2022, at the Lynn Dunn Memorial Building, where an additional visitation will be held one hour prior to the service. Pastor Jon Moss will officiate. Private family burial will follow at Prairie Chapel Cemetery in rural Marion. Murdoch Funeral Home & Cremation Service of Marion is assisting the family. Stephen Jay Martin was born February 25, 1948, in Cedar Rapids, Iowa, the son of Loyd and Lois (Stephenson) Martin. He was baptized and confirmed at Prairie Chapel United Methodist Church in Marion. Stephen was a proud member of the Prairie Union Wildcats 4-H Club. He attended and graduated from Linn-Mar High School in 1966. While there, Stephen participated in many musicals and was an enforcer/benchwarmer on the basketball team. After graduation, he enlisted in the Iowa National Guard and served six years. After completing his service to his country, Stephen continued his lifelong passion of farming. Stephen married Karen Louise Gray on April 27, 1968, at Center Point Christian Church. In 1971, they bought and moved to the current farm site and began their family. Throughout his life, Stephen raised hogs, sheep, cattle, corn, beans, alfalfa, wheat, and oats. He received many awards for his crop production including the Marion Jaycees Young Farmer Award and yield production contests in the Better Crops Club. Stephen was most proud of continuing his farming legacy with Albert as they cared for the land together. His life of service to his community was evidenced by his involvement with the Linn County Fair Board (49 years), Brown Township Mutual Insurance board (21 years), Linn County Pork Producers, Linn County Soil Commissioner, Linn County Extension Council, and Prairie Chapel UMC boards. Stephen was a proud member of the Prairie Chapel Youth group and received UMW Special Mission Recognition pin in 1995. He was also a member of the JI Case Collectors Association and the East Central Iowa 2 Cylinder Club, even though he doesn’t own a John Deere. Stephen was passionate about supporting local economy by visiting Sally’s on Broadway, Hometown Market, the local Napa Auto Parts, Crowbar’s, and many others. He knew no stranger, only friends he hadn’t met yet. He often introduced himself as “Steve Martin, A Wild and Crazy Farmer.” He loved his tractor rides and was often traveling scenic eastern Iowa, southern Wisconsin, and northern Illinois on his 530 Case. Stephen loved watching his grandkids participate in their activities, no matter what it was or how far he had to travel to see it happen. During his time with the Linn County Fair Board, Stephen served on almost every committee. He was instrumental in the development of the Lynn Dunn Memorial Building, and in bringing the East Central Iowa 2 Cylinder Club to the fair. Kids Day at the Fair was one of Stephen’s favorite days, and he loved hosting the grandstand artists and events. He often could be found napping in various grandstands or cots during the fair. Stephen is survived by his mother, Lois Martin; wife, Karen Martin; four children, Jeanna (Erik) Lilleberg of Atwater Minnesota, Barbie (Jeremy) Waltz of Central City, Stephanie (Patrick) Cory of Cedar Rapids, and Albert (Vicki) Martin of Springville; eleven grandchildren, Lucas, Nicole and Hannah Lilleberg, Morgan and Jacob Waltz, Paul, Jordyn and Kaycee Cory, Preston, Paige and Parker Martin; four siblings, Kathy (Tim) Clemens, Daryl (Maria) Martin, Marcia (Jeff) Jordan, and David (Beth) Martin; and many nieces, nephews, cousins, extended family members and dear friends. He was preceded in death by his father, Loyd Martin; grandson, Ethan Lilleberg; nephew, Chase Martin; and best friend, Lynn Dunn. The family asks in lieu of flowers, memorials may be designated to the Stephen Martin Memorial Fund, Heartland Bank & Trust, 325 Oakbrook Dr, Marion Iowa, 52302. Memorials will be designated at a later time to continuing his legacy.

The family of Stephen Jay Martin created this Life Tributes page to make it easy to share your memories.

Stephen Martin, 74, of Springville, Iowa, went to be with his...

Send flowers to the Martin family.