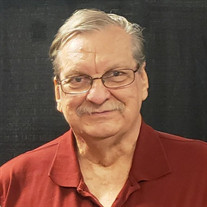 Steven “Steve” Ray Ackerman, 76, of Marion, Iowa, passed away on Sunday, May 15, 2022, at the Dennis & Donna Oldorf Hospice House of Mercy in Hiawatha, Iowa. A private family burial was held at 1:30 p.m. on Wednesday, May 18, 2022, at Oak Shade Cemetery in Marion. A Celebration of Steve’s Life will be held at 4:00 p.m. on Friday, May 27, 2022, at Murdoch Funeral Home & Cremation Service in Marion, with his cousin, Larry Croghan, officiating. Family will greet friends and family following the service. Steve was born on February 12, 1946, in Atlantic, Iowa, the son of Edward Porter and Edna Luella (Nelson) Ackerman. He was a 1964 graduate of Atlantic High School, and went on to attend Iowa State University, graduating in 1969. On June 24, 1967, Steve was united in marriage to Joan Cynthia McCrory in Cumberland, Iowa. He served honorably in the United States Air Force during the Vietnam War. Steve worked as an Electrical Engineer for Rockwell Collins, retiring after 43 years. He was a devout Lutheran all of his life. Steve was active with Boy Scouts and Camp Fire, supporting his children during their school years. A radio enthusiast, he was a member of several radio clubs and had obtained his amateur radio license. Steve was a lifetime member of the Linn County Genealogy Society. He enjoyed painting, woodworking, traveling, gardening, and camping. Steve will be greatly missed by all who knew and loved him. Steve is survived and lovingly remembered by his wife of nearly 55 years, Joan Ackerman of Marion; daughter, Julia Ackerman of Marion; son, Anthony (Cindy) Ackerman of Marion; and three grandchildren, Miranda Vollmer of Marion, Shawn (Jessica) Vollmer of Muscatine, Iowa, and Tyler Ackerman of Marion. He was preceded in death by his parents, Edward and Edna Ackerman; father-in-law and mother-in-law, Robert and Ida McCrory; brother, Kenneth Ackerman, and daughter-in-law, Rebecca Ackerman. In lieu of flowers, memorials in Steve’s memory may be directed to the Polycystic Kidney Disease Foundation (PKD Foundation) at 1001 E 101st Terrace #220 in Kansas City, Missouri, 64131.

The family of Steven "Steve" Ray Ackerman created this Life Tributes page to make it easy to share your memories.

Send flowers to the Ackerman family.