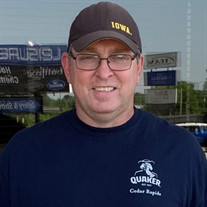 Steven “Steve” “Wags” Carl Wagner, 52, of Marion, Iowa, passed away unexpectedly on Sunday morning, January 17, 2021. The family will greet friends from 4 to 7 p.m. on Wednesday, January 20, 2021, at Murdoch Funeral Home & Cremation Service in Marion. A funeral service will be held at 10:30 a.m. on Thursday, January 21, 2021, at the funeral home, conducted by Pastor Charles Johnson of Chelsea United Methodist Church. Military Honors by the United States Navy Honors Detail. All guests are respectfully requested to wear a face mask and practice social distancing. A livestream of the funeral service may be accessed on the funeral home website tribute page for Steve, under “photos and videos or media,” starting at 10:30 a.m. on Thursday Steve was born on November 28, 1968, in Cedar Rapids, Iowa, the son of Carl and Virginia (Grieder) Wagner. He graduated from Belle Plaine High School, where he wrestled at State and played baseball. Steve served honorably in the United States Navy from 1989 to 1992. On September 17, 1994, he was united in marriage to Monica R. Manley in Albia, Iowa. Steve worked in maintenance for Quaker Oats from 2001 until his passing. He was a member of the Belle Plaine American Legion Post 39. Steve loved to mushroom hunt, fish, and to pull an occasional slot machine, when allowed. He loved to dance with anyone who would take the floor with him. Steve was an avid Los Angeles Rams fan, wherever they were. He always cared and looked out for others, he never met a stranger. Steve loved his kids and was their biggest fan. His whole life revolved around Monica and the kids. He was a very hard worker, loving husband, father, brother, and son; a true friend. Steve will be greatly missed by all who knew and loved him. Steve is survived and lovingly remembered by his wife of 26 years, Monica Wagner of Marion; daughter, London Wagner of Marion; son, Garret Wagner of Marion; parents, Carl and Virginia Wagner of Chelsea, Iowa; brother, John (Debbie) Wagner of Chelsea; sister, Amy (Steve) Schuster of Glen Ellyn, Illinois; mother-in-law, Frances Manley of Des Moines, Iowa; seven nieces and nephews; and four great-nieces and nephews. He was preceded in death by his grandparents, Carl and Beryl Wagner and John and Myrtle Grieder; and father-in-law, Jack Manley. In lieu of flowers, memorials in Steve’s memory may be made to the family.

The family of Steven "Steve" "Wags" Carl Wagner created this Life Tributes page to make it easy to share your memories.

Send flowers to the Wagner family.