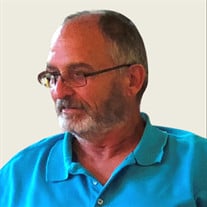 Terry “Russ” Wright, 67 of Cedar Rapids, Iowa, passed away Friday, May 14, 2021, at the University of Iowa Hospitals. A celebration of Terry’s life is being planned for this summer, and as details develop the specifics will be shared, so that those that love him can share in honoring his memory. Murdoch-Linwood Funeral Home & Cremation Service in Cedar Rapids is assisting the family. Terry was born February 4, 1954, to Russell and De Lores (Dvorak) Wright in Cedar Rapids. He was raised on the family farm outside Van Horne and graduated from Benton Community High School with the Class of 1972. On May 16, 1980, Terry was united in marriage to Irene Geesaman. They lived primarily in Cedar Rapids and Swisher during their 41-year marriage. Terry owned Wright Homes, and built primarily in the Solon and Ely communities. Terry loved boating and being in the water. Together with Irene he traveled to many locations throughout the country and enjoyed experiencing the people and places they would visit. Dogs were always an important part of Terry’s life. At the time of his passing his Golden Retriever Billy was the lucky winner of his affections. Terry is survived by his wife, Irene; his brother, Kevin (Sandy); sister, D’dree (Jim) Frizzell; and brother, Drew. In addition, he is survived by his sisters and brothers-in-law, Dennis Geesaman, Roger Geesaman, Gloria (Mike) Wilford, Karen (Dave) Farland; 17 nieces and nephews; and many grand-nieces and nephews, and a great-great-grandniece. He was preceded in death by his parents, his grandparents, one aunt, two uncles, one cousin, father and mother-in-law, and one sister-in-law.

Terry &#8220;Russ&#8221; Wright, 67 of Cedar Rapids, Iowa, passed away Friday, May 14, 2021, at the University of Iowa Hospitals. A celebration of Terry&#8217;s life is being planned for this summer, and as details develop the specifics will... View Obituary & Service Information

The family of Terry 'Russ' Wright created this Life Tributes page to make it easy to share your memories.

Send flowers to the Wright family.