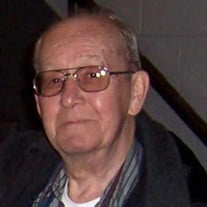 Theodore “Ted” “Butch” Bean, Jr., 81, of Cedar Rapids, Iowa, died Sunday, December 20,2020, at Northbrook Manor Care from complications of COVID-19. A funeral service will be held at 2:00 p.m. on Saturday, December 26, 2020, at Murdoch-Linwood Funeral Home & Cremation Service in Cedar Rapids. Burial will follow at Linwood Cemetery in Cedar Rapids. All guests are respectfully requested to wear a mask and practice social distancing. A livestream of the funeral service may be accessed on the funeral home website tribute page for Ted, under “photos and videos or media,” starting at 2:00 p.m. on Saturday, December 26th. Ted was born on July 30, 1939, in Cedar Rapids, the son of Ann (Williams) and Theodore Bean, Sr. He attended Washington High School and enlisted in the Navy after graduation, serving from 1958 to 1962 during the Vietnam War. Ted married Rosann Marie Jelinek on September 6, 1961; they had 2 children. Ted worked most of his life as a machinist at Goss Printing Press in Cedar Rapids. He retired from Goss in 2001. Ted was an avid woodworker and received awards for his creations, including an article in The Gazette about his building flag display boxes for families of soldiers killed in Iraq and Afghanistan as well as wooden toys for Toys for Tots. Survivors include his son, Bryon Keith (Dorothy) Bean of Cedar Rapids; daughter, Pamela Marie (Randy) Buck of Henderson, Nevada; five grandchildren, Alexander and Keith Buck, Joseph, Skylar, and Elizabeth Bean; 2 great-grandchildren, Aiden and Addison Buck; and sister, Nancie-Ann (Gary) McClure of Cedar Rapids. He was preceded in death by his parents; and wife, Rosann in 2008; and his dog, Lady. Memorials may be directed to The Salvation Army, 1000 C Avenue NW, Cedar Rapids, Iowa, 52405.

The family of Theodore 'Ted' 'Butch' Bean, Jr. created this Life Tributes page to make it easy to share your memories.