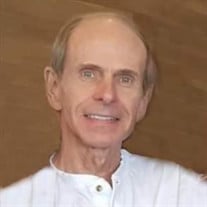 Thomas Lee Heabel, 75, formerly of Cedar Rapids, Iowa, passed away in Naples, Florida, on December 28th, 2020, after a courageous battle with Alzheimer’s Disease. A visitation will be held from 4 – 8 p.m. on Friday, January 15, 2021, at Murdoch-Linwood Funeral Home & Cremation Service in Cedar Rapids. A private family graveside will be held at Czech National Cemetery in Cedar Rapids. All guests are respectfully requested to wear a mask and practice social distancing. Thomas was born on April 30th of 1945, in Des Moines, Iowa. His parents, Walter A Heabel and Marjorie Kasper Heabel, of Cedar Rapids, lovingly adopted him as their son months later. His birthfather heroically served in the United States Navy as a Radio Control operator in the Pacific Theatre during World War II and was killed shortly prior to Thomas’s birth. Of Czechoslovakian Decent, Thomas’ parents raised him with Czech influence immersed within the community of Cedar Rapids. Proud of his family’s heritage, Tom was actively involved in the preservation of his family’s ancestry and cultural traditions of the Czech people in Iowa. He graduated from Cedar Rapids’ George Washington Senior High School in 1963, attended Simpson College in Indianola, Iowa, pledged and became of member of Alpha Tau Omega Fraternity. In 1965, he transferred to Drake University to earn a Bachelor of Science Degree in Business Administration and to study alongside his high school sweetheart, Mary Larrabee Allen, to whom he would be married in Clermont, Iowa, at Montauk on August 5th of 1967. (Daughter of Alvin W. Allen and Julia Larrabee Robbins Allen, of Allen Motor Company in Cedar Rapids) Following graduation from Drake, Tom continued in the footsteps of his father, Walter, as a third generation Lumberman, Owner, and Custom Home Builder at Heabel Lumber Company in Cedar Rapids. Tom and Mary adopted their daughter, Lindsay Larrabee Heabel, in 1968 and their son, Thomas Alden Heabel, in 1973. Thomas’s professional career extended beyond the lumber company. He was a member and president of both the Iowa Lumberman’s Association and Northwestern Lumberman’s Association. He served on the Board of Directors of First Trust and Savings Bank for many years, conducted property appraisals for the bank, was a member of Kiwanis in Cedar Rapids, the Rotary Club in Lake Ozark, Missouri, and the Mercedes Benz Club. He treasured peace and serenity of the water at the ‘brown house’, as his son called it, boating and fishing with his family on the South Shore of Lake Superior in Cornucopia, WI.(He named a boat ‘Serenity’) Winters were spent on the water in Ft. Lauderdale and the Florida Keys with his family near his parents. In 1986, Thomas sold the lumber company, having worked since the age of 9, it was bittersweet, but he was grateful to be provided the opportunity to enjoy the fruits of his labor. Those who knew and loved him understood his deep appreciation of history and desire to preserve and refurbish historical artifacts of value for future generations, including collectible classic sports cars destined for ‘junkyards’. He discovered an Austin Healy 3000 while on vacation in the Florida Keys, identical to the one he drove in college. He towed the rusted beauty through an ice storm only to be snowed in at a motel with no heat in Cave City, Kentucky. That was dedication. Most notably, he was a passionate Lionel Train collector and lifelong member of the Train Collectors Association (TCA). His train rooms, tables, and walls displaying Lionel model trains are legendary. In 1992, Tom moved to Lake of the Ozarks, Missouri where the boating season was longer. He sold real estate for Remax and Bobbi Bash and was a mentor to several entrepreneurs. Tom was an active member of Christ the King Lutheran Church. In 1998, tragedy struck when his beloved son, Thomas Alden Heabel, a Corporal in the United States Marine Corps. was murdered in Cedar Rapids. It broke his heart, but not his spirit. It gave him great pleasure to assist those in need and was extremely generous, but rarely spoke his charitable contributions. Over the years his daughter learned of his many acts of kindness. He purchased carloads of toys for families who could not afford Christmas gifts and gave ‘Christmas’ bonuses to struggling single working parents who were juggling school and working for minimum wage at fast food restaurants where he ate for lunch every day. Thomas was a loyal friend, loving father, and adored his grandchildren. He is deeply missed. He was preceded in death by his grandparents, Frank and Bessie Kasper; parents, Walter A and Marjorie Ella Heabel (Kasper); Aunt, Lucille Kasper Shebetka; Uncle, Rudoph Heabel; and son, Thomas Alden Heabel. He is survived by his daughter, Lindsay Larrabee Heabel (Cedar Rapids); Grandchildren Brianna Larrabee Shinners (Seattle), Paige Larrabee Williams (Iowa City), Ian Thomas Williams, and Kiernan Emily Williams (St Louis). In lieu of flowers, please send memorials to the National Organization of Parents of Murdered Children at POMC.org.

The family of Thomas Lee Heabel created this Life Tributes page to make it easy to share your memories.

Send flowers to the Heabel family.