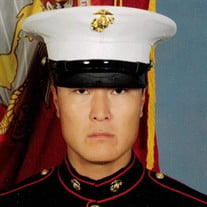 Ty John Casey, 39, passed away on May 13, 2022. He was born January 20, 1983, in South Korea. That date and the name of Tae Min were given to him when (approximately) at the age of three, he was found in Pusan City, South Korea, alone and assumed abandoned. He then lived in orphanages until February 13, 1988, then thru Holt International Adoptions he arrived at the Des Moines Airport to meet his new family, who welcomed him with open arms. We called him Ty. He had been escorted on the long flight by a member of the Air Force, who was Stationed in Korea. He said that during the first part, Ty ate everything in sight and the last part it all came up. He was a stinky boy right off the plane when we first met but still so huggable. The only English word he knew was soda. Food would prove to be very important to him and lots of it, all through his life. His Iowa hometown was Shellsburg, where he made many friends as a youngster and as an adult did seasonal general grounds maintenance at the Wildcat Golf Course. Before he went into the military, he worked with his Dad at D.A.D. Manufacturing and later volunteered with his Mom at the local animal shelter. For many years he was the family’s farm critter sitter that made it possible for his parents to get away and travel. On October 5, 2007, Ty graduated from Marine Corps Recruit Depot in San Diego, California. His whole family attended the ceremony and will never forget that day. His inactive service started in 2009 and he received an Honorable Discharge October 31, 2012. He liked to collect classic joystick gaming controllers and hats. Ty liked streaming movies and growing his coal black hair long. He was proud to work at Home Town Restyling and said he’d surprised himself that he was doing work that he loved and felt he was good at(crediting his previous foreman, Tim). Ty was a siding man and just got new responsibilities that made him feel good about his hard work paying off and excited for the possibilities for the future. Left to cherish his memory are his parents, John and Donita Casey; two sisters and brothers-in-law, Carmen and Tim Trainor, and Christene and Robert Langmann; nieces and nephews, Kyle and Ian Langmann, and Sydney and Payton Trainor; and many aunts, uncles, cousins, and friends. We will miss his bear hugs and loud laughter. He left our family with many Ty-isms that will no doubt be re-told every time our family gathers and we can laugh again. Rest in Peace Bubba. Brother and sister’s bond forever. Private family services will be held at a later date.

Ty John Casey, 39, passed away on May 13, 2022. He was born January 20, 1983, in South Korea. That date and the name of Tae Min were given to him when (approximately) at the age of three, he was found in Pusan City, South Korea, alone and assumed... View Obituary & Service Information

The family of Ty John Casey created this Life Tributes page to make it easy to share your memories.

Send flowers to the Casey family.