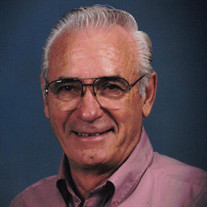 Vern Votroubek, 91, of Fairfax, Iowa, died Sunday, November 21, 2021, at his home. A memorial service will take place at 10 a.m. on Friday, November 26, 2021, at the Murdoch-Linwood Funeral Home & Cremation Service in Cedar Rapids, Iowa. Inurnment will take place at a later date at Linwood Cemetery in Cedar Rapids. Vern was born January 24, 1930, in Fairfax. He was raised by his maternal grandparents on their farm until he was 12 years old and then moved to be with his mother and step-father, Lydia (Hospodarsky) and Edwin Kahler. Vern graduated from Oxford High School in Oxford, Iowa, Class of 1948. He served in the United States Air Force from 1950-1954 during the Korean conflict. On June 6, 1953, Vern was united in marriage to Dell Jackson at First Baptist Church in Pyote, Texas. He worked for Wonder Bread, Colonial Bakery, and finally at Teamsters Trucking Industry (Briggs Transportation and Churchill Truck Lines) until his retirement in 1991. Vern was a member of Trinity Lutheran Church, Fairfax American Legion Post #572, and Better Life Lodge #423. He enjoyed collecting model tractors and woodworking – especially making clocks and pens. Vern and Dell loved traveling around the United States in their motorhome. Survivors include his wife of 68 years, Dell Votroubek of Fairfax; daughter, Karen (Jerry) Abben of Cedar Rapids; son, Doug (Tammie) Votroubek of Cedar Rapids; and three grandchildren, Matt Abben of Sterling Heights, Michigan, Tyler (Katrina) Votroubek of Cedar Rapids, and Nicole Votroubek (Connor Kinkade) of Des Moines. He was preceded in death by his mother and step-father, Lydia and Edwin Kahler; granddaughter, Katlin Abben; and two brothers, Myron and Ronald Kahler. In lieu of flowers, memorials may be directed to Trinity Lutheran Church in Cedar Rapids or the Fairfax Memorial for Veterans.

The family of Vern Votroubek created this Life Tributes page to make it easy to share your memories.

Send flowers to the Votroubek family.