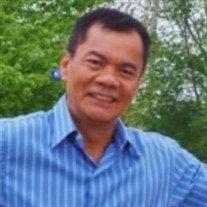 Victor Aviles, 58, of Swisher, Iowa, died Thursday, March 31, 2022 at his home after a long illness. A Vigil Prayer Service will be held at 3:30 p.m. on Wednesday, April 6, 2022, at Murdoch-Linwood Funeral Home & Cremation Service in Cedar Rapids, Iowa, with family present for a visitation from 4-7 p.m. A Funeral Mass will be held at 1 p.m. on Thursday, April 7, 2022, at St. Jude Catholic Church in Cedar Rapids. Victor was born on June 29, 1963, in the Philippines. He was the youngest of 14 children to Pedro Aviles, Sr. and Maria Deponi. He graduated from high school in the Philippines, later moving to the United States in 1992. He was a dedicated worker for Whirlpool Corporation in Amana, Iowa, and retired as an inspector in 2021 after 27 years. Victor enjoyed karaoke, watching game shows, great food, grilling, and camping. He was a jokester, loved having a good time, and if there was dancing, he would be at the center of the dance floor inviting others to join him. Victor was a friend to all; he never shied away from meeting new people and made everyone feel welcome. Victor was the epitome of a grand host at family gatherings, celebrations, and parties. He was determined to make sure everyone was having a fun time, and that they did not leave without food to bring home. He was the kind of person that always put a smile on your face with his suave and charming personality. Victor was a proud Filipino and lived life to the fullest. Above all, Victor’s love for his family was most important. He took pride in his children and grandchildren and continued to be there for them whenever he could until his last day. Although his heart failed him in the flesh, it will forever beat strongly in spirit to the ones he loved most dear. Victor is survived by his three children, Elvina (Joel) Hill of Swisher, Iowa, Victor Aviles, Jr. of Mt. Pleasant, Iowa, and Ryan Aviles of Iowa City, Iowa; four grandchildren, Braysen, Tatum, Nigel and Mirella; siblings, Cely Alonso, Oscar Aviles, Jose Aviles, Vilma Carlos, Evelyn Aviles, and Marie Nolz; many nieces and nephews; spouse, Ruby Wagner; past significant others, Elsa Talay and Marilyn Rodriguez; his mga kompadre, Tolen Forte, Jay-R Francisco, and Mike Denlinger. Victor was preceded in death by his parents, Pedro & Maria Aviles; and siblings, Erlinda, Carmen, Sony, Marina, Eduardo, June and Milagros.

Victor Aviles, 58, of Swisher, Iowa, died Thursday, March 31, 2022 at his home after a long illness. A Vigil Prayer Service will be held at 3:30 p.m. on Wednesday, April 6, 2022, at Murdoch-Linwood Funeral Home & Cremation Service in Cedar... View Obituary & Service Information

The family of Victor Aviles created this Life Tributes page to make it easy to share your memories.

Send flowers to the Aviles family.