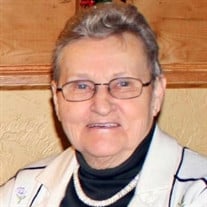 Viktoria "Dora" Dixon, 84, of Marion, Iowa, was called home to be with God on Wednesday, December 29, 2021. Family will greet friends from 1:00 p.m. to 2:00 p.m. on Saturday, January 8, 2022, at Murdoch Funeral Home & Cremation Service in Marion. A funeral service will follow at 2:00 p.m. on Saturday, conducted by Pastor Ray Peters. Burial will follow at Oak Shade Cemetery in Marion. A reception will be held at 3:30 p.m. at Faith Bible Church in Cedar Rapids, Iowa. Dora was born February 12, 1937, in Penzberg, Germany, the daughter of Xaver and Viktoria (Rappolder) Penzkofer. After completion of the mandatory 8th grade, she went to work as an apprentice in a sewing factory for 1-1/2 years. She then worked as a housekeeper for an Army sergeant in Bad Tolz, Germany. It was there she met her future husband, Charles "Sam" Dixon, after he was invited to dine in the sergeant's home. On February 11th, 1956, during a snowstorm, they were united in marriage in Penzberg, Germany. Before moving to the United States, they had two sons, Charles "Chuck" Dixon and Robert "Rob" Dixon. At her age of 20 they made a home in Cedar Rapids, Iowa, and had two more children, a son and a daughter, Daniel "Dan" Dixon and Heidi Dixon. While for the most part she loved her job as a homemaker, she also worked at Nash Finch as a warehouse worker for eight years, and in the cafeteria at Kennedy High School for four years. At home she loved swimming at the YMCA, garage sales, gardening, working in her flower beds for hours, cooking (most always from scratch), baking, and crafts. After Sam retired in 1986, they enjoyed traveling and spending time during the winters at their second home in Florida. There they both loved spending time with friends playing cards, fishing, bicycle riding, and shopping at flea markets. In her mid 30's, Dora made the most important decision of her life, which was to follow Christ, securing her place in heaven for eternity and live for Him in life and service to others. After years of faithfully attending church services and learning about the Bible and her Lord, she grew into a vibrant, elderly lady, touching people's lives wherever she went. Whether visiting widows, the sick, a kind word or hug for strangers, she loved to share about the Hope within her. Dora is survived by her sons, Chuck (Candi Schnepf) of Anamosa, Rob of Troy Mills, Dan (Jenn) of Rio Verde, Arizona; daughter, Heidi (Ray Peters) of Council Bluffs; seven grandchildren, Matt, Nick, Austin, Kelli Jo, Rachel, Caleb, and Charles "CJ"; ten great-grandchildren, Kaleb, Morgan, Katlynn, Pacience, Bridget, Genevieve, Reagan, Daniel, Dominic, and Caleigh; one brother, Hans (Gailey); and many nieces and nephews. She was preceded in death by her parents; one sister, Antonie Madden (Rappolder); four brothers, Englebert Rappolder, Xaver, Hans, Max Penzkofer; and two grandsons, Josh Dixon, and infant, Samuel Peters. In lieu of flowers, the family would like donations in Dora’s memory to be directed to either Bridgehaven Pregnancy Support Center in Cedar Rapids or to Faith Bible Church in Cedar Rapids.

The family of Viktoria Dixon created this Life Tributes page to make it easy to share your memories.

Send flowers to the Dixon family.