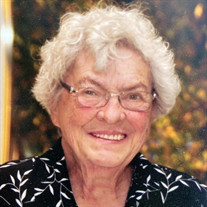 Virginia “Ginny” Carol Cronbaugh, 84, of Cedar Rapids, Iowa, died Wednesday, December 1, 2021, at The Meth-Wick Community. A visitation will be held from 4 – 7 p.m. on Monday, December 6, 2021, at the Legacy Center at Murdoch-Linwood in Cedar Rapids. A funeral service will take place at 11 a.m. on Tuesday, December 7, 2021, at Murdoch-Linwood Funeral Home & Cremation Service in Cedar Rapids. Burial will follow at Oak Hill Cemetery in Cedar Rapids. All guests are respectfully requested to wear a mask. A livestream of the funeral service may be accessed on the funeral home website tribute page for Ginny, under “photos and videos or media,” starting at 11 a.m. on Tuesday, December 7, 2021. Ginny was born December 15, 1936, in Cedar Rapids, to Louis and Wilma (Popelka) Melsha. She graduated from Franklin High School in 1954. Ginny went on to receive her teaching degree from Simpson College, where she met Mervin “Merv” Cronbaugh. On August 24, 1958, Ginny was united in marriage to Merv in Cedar Rapids; he preceded her in death on June 11, 2009. She started her career in Fort Madison teaching physical education. Ginny moved to Champaign, Illinois, where Merv received his Master’s degree, and she gave birth to their first son, Chris, in February 1964. The family relocated and purchased their first home in Cedar Rapids where their second son, David, was born in May 1966. Ginny stayed home to raise her sons until August 1977, and then returned to the workforce with a job in the Cedar Rapids Community School District working with students in special education. She also worked at AT&T and finished her career at Kirkwood Community College in the bookstore. Ginny enjoyed spending time with her family and friends. She was a sports enthusiast, loved Christmas, and enjoyed the travel and companionship with the Kirkwood Board of Trustees and their spouses. Survivors include her children, Chris (Eryn) Cronbaugh and David (Sheila) Cronbaugh; grandson, Noah Cronbaugh (Jenna Callahan); brother-in-law, Lowell (Nancy) Cronbaugh; and two nephews, Mike and Kurt. She was preceded in death by her parents, Louis and Wilma Melsha; and her husband, Merv Cronbaugh. The family is grateful to the Meth-Wick staff and Mercy Hospice for the compassionate care they provided to Ginny. Memorial contributions may be directed to the Kirkwood Foundation in c/o the Merv & Ginny Cronbaugh Endowed Scholarship; a fund that was started for the non-traditional student attending Kirkwood.

The family of Virginia 'Ginny' Carol Cronbaugh created this Life Tributes page to make it easy to share your memories.

Send flowers to the Cronbaugh family.