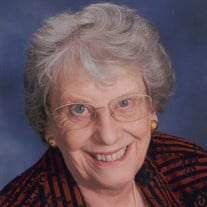 Virginia “Maxine” Schultz, 89, of Cedar Rapids, Iowa, died Sunday, May 9, 2021. A Celebration of Life will be held at a later date. Murdoch-Linwood Funeral Home & Cremation Service in Cedar Rapids is assisting the family. Maxine was born on April 29, 1932, in Marshalltown, Iowa, the daughter of Frank and Wilma (Martinson) Partridge. She graduated high school and went on to obtain her teaching degree. Maxine was united in marriage to Arlo Schultz on April 21, 1956, in Marshalltown. She taught at Harrison, Buchanan, and Erskine schools in Cedar Rapids before her retirement in 1966. Maxine worked at Brucemore Gardens and was heavily involved in the restoration of the garden. She was a member of St. Mark’s Lutheran Church, the Cedar Rapids Garden Club, and was a founding member of the Indian Creek Nature Center. Survivors include her husband, Arlo Schultz; son, Stephen Schultz of Cedar Rapids; daughter, Deborah Schultz of Cedar Rapids; sister, Sallie (Stuart) Metnick of Tempe, Arizona; and grandchildren, Eliza and Zachary Schultz. She was preceded in death by her parents, Frank and Wilma Partridge; son, David Schultz; and brothers, William and Richard Partridge. Memorials may be directed to the family.

The family of Virginia 'Maxine' Schultz created this Life Tributes page to make it easy to share your memories.

Send flowers to the Schultz family.