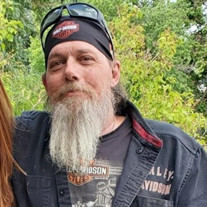 Wade Robert Fink, 58, of Marion, Iowa, passed away on Thursday, October 14, 2021, at his home. A visitation will be held from 1 - 2 p.m. on Wednesday, October 20, 2021, at Murdoch Funeral Home & Cremation Service of Marion, with funeral services following at 2 p.m. Burial will be at Riverside Cemetery, Anamosa. Wade was born on August 5, 1963, in Cedar Rapids, Iowa, the son of Robert Raymond Hamilton and Patricia Lynette Johnson, and was later adopted by Dennis Fink. He worked as an all-around handyman and jack of all trades. He loved the St. Louis Cardinals, bowling, golfing, and fishing. Wade always looked forward to his annual August camping trips in Wyoming. Wade will be greatly missed by all who knew and loved him. Wade is survived and lovingly remembered by his daughter, Kylie (Jordan) Pelzer of Morrison, Colorado; adoptive father, Dennis (Petra) Fink of Laramie, Wyoming; stepmother, Keryl Hamilton of Cedar Rapids; half-brother, Joe Hamilton of New York; and six stepsisters. He was preceded in death by his mother, Pat O’Rourke and his birth father, Bob Hamilton.

The family of Wade Fink created this Life Tributes page to make it easy to share your memories.

Send flowers to the Fink family.