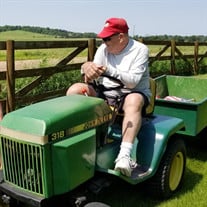 Weldon “Denny” Cargin, 78, of Cedar Rapids, Iowa, died Monday, December 14, 2020, at Mercy Medical Center, Cedar Rapids. Private family graveside services were held at Campbell Cemetery in Bertram, Iowa. Murdoch-Linwood Funeral Home & Cremation Service, Cedar Rapids, assisted the family with arrangements. Denny was born February 13, 1942, in Cedar Rapids, the son of Weldon and Berniece (Enats) Cargin. He graduated from Washington High School. Denny was united in marriage to the love of his life, Gloria Curry on August 28, 1959, in Iowa City, Iowa. He retired in 2014, from Alliant Energy after 57 years of dedication. Denny was a member of Antioch Christian Church. Survivors include his loving wife of 61 years, Gloria Cargin; daughters, Tracy Techau and Tori Cargin, all of Cedar Rapids; grandchildren, Tammy (Coy) Detert and Matthew Techau; great-grandchildren, Cammy Detert and Dawsyn Techau; and loving brother, John Cargin of Cedar Rapids.   Denny was preceded in death by his parents and a lot of other people. And now for the rest of the story…   Early last century after doing a stint in the Navy, Denny was dropped off in Florida to make his way home to Iowa. It took much longer to make the journey due to a new initiative to banish all of the elephants from the continent. It took a few years to accomplish this but it was a successful mission and there are still no wild elephants roaming free. He finally arrived home and continued on with his schooling where he met the love of his life, Gloria Curry. (Yes, he was underage when he was in the Navy and banishing elephants….don’t tell anyone).   Denny and Gloria married young, sneaking off in the dead of night to Iowa City to find a guy to marry them. Much to everyone’s astonishment the union remained strong for more than 61 years and they became a model of love, laughter, and true partnership. They had a few children, worked hard and planned for the future. Along the way there were many family vacations, National Parks being the center of most trips. These trips always included travel West and North, never East. Denny didn’t think anything good was happening in the East so why bother and the South wasn’t even discussed….too hot. As usually happens, the children grew up and had lives of their own so the trips stopped, until around 1996 when Denny and Gloria started traveling again each summer with their two girls. And after some coaxing, many of those trips were to the South and East. Washington, D.C., Savannah, and Charleston became favorite destinations and Denny and Tori enjoyed many visits to battlegrounds and plantations. Gloria and Tracy were not as interested in that aspect but trailed along in solidarity. So much fun and laughter happened on these trips and are cherished memories for the entire family. The last few trips also included one of the great granddaughters which made the time spent even more special. Twice a year Denny was able to slip the chains of work and escape with his buddies for snowmobile trips and backwoods fishing excursions. These trips were a highlight to his year but not a lot is known about the content of these “manly” trips. He was a lifelong bowler and made a lot of friends on the many alleys he roamed. Golf was another pastime he enjoyed. He involved his young daughters in this at an early age in the form of hunting for golf balls at Jones Park. After retirement he joined the boys at coffee each morning where they attempted to solve the world’s problems and they became another cherished group of friends. Denny cherished the extended family of in-laws, nieces and nephews he gained from Gloria’s large family. A lot of time was spent with all of them at holidays, camping during the summer, card parties, and many family celebrations. He was a man of deep faith and a love of nature. This love of nature and the natural order of things was important to him in a quiet way and his family carries this with them as one of his guiding principles. The family would like to thank the dedicated and caring team of professionals at Mercy Medical Center in Cedar Rapids. Those working on the COVID floor, in ICU and the Cardiac unit are angels on earth who have a true gift.   Memorials may be directed to Antioch Christian Church.

The family of Weldon 'Denny' Cargin created this Life Tributes page to make it easy to share your memories.

Send flowers to the Cargin family.