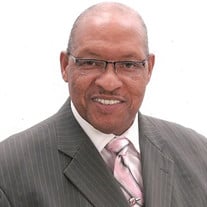 Pastor Wendell A. Beets, 75, of Cedar Rapids, Iowa, transitioned from labor to reward on Wednesday, February 24, 2021, at Mercy Medical Center, Cedar Rapids. Funeral services will be held on Saturday, March 13. Murdoch-Linwood Funeral Home & Cremation Service in Cedar Rapids is assisting the family. Please visit www.wordoffaithcogic.org for details. Due to limited seating capacity, registration is required for attendance. Pastor Wendell Anthony Beets was born on September 6, 1945, in Thornton, Arkansas, the son of Richard and Elizabeth (Roach) Beets. He graduated from Calhoun Co. High School in Arkansas. Pastor Beets’ athletic and academic journey led him to attend Coe College in Cedar Rapids on a basketball scholarship. He studied several advanced courses in ministry which continued to build the foundation of his faith and leadership. Pastor Beets served his country honorably in the United States Air Force. He was united in marriage to Lenora Carpenter on October 22, 1975, in Louise, Mississippi. This was the start of what would become a large and loving family based on the Word of God. Pastor Beets served his Lord, his community, and his ministry lovingly for over 43 years. He was ordained in the Church of God in Christ (COGIC), Inc. and founded the Sound Doctrine COGIC in Cedar Rapids in 1977. He served as Pastor of the Sound Doctrine COGIC until resigning in 1992 and appointed Elder Joe Pledge to Pastor and he changed the name of the ministry to New Life Church of God in Christ. Pastor Beets began a bible study group at his home, and it was from this small bible study group that the Word of Faith Pentecostal COGIC was birthed in 1993. Pastor Beets was appointed Pastor of the Word of Faith Pentecostal COGIC upon Supt. R. L. Daye’s recommendation. He served the Kingdom of God in many capacities that include: United States Chaplain Association member, Administrative Assistant of the Iowa Jurisdiction COGIC, Superintendent of the W.D. Smith District COGIC, Assistant Superintendent of the W.D. Smith District COGIC, W.D. and Smith District COGIC President of the Youth Dept. Pastor Beets loved good country cooking. He made delicious BBQ, collard greens, fried pork chops, mashed potatoes, green beans, home-made ice cream and pound cakes, just to name some favorite dishes he prepared. He loved, basketball, football, and had a special love for boxing. He won all his amateur boxing bouts and stopped short of becoming a professional boxer. God had higher plans for his life. Pastor Beets was mission and soul minded. He financially supported “Fire Around the World” missionaries in the United States to help dig wells and to help pay for a vehicle that would travel over rough terrain to reach souls as the missionaries spread the gospel in India. Pastor Beets helped establish African congregations from his local church building and the facility at 716 8th Avenue S W. Many African leaders left the United States and moved back to Republic of the Congo and churches have multiplied to over 25 congregations through Word of Faith’s Ministry. Pastor Beets also partnered with St. Jude’s Hospital to help support the cure of cancer in children. He also sent financial donations to “Feed the Children.” Pastor Beets establish a hot meal program at Word of Faith to feed the homeless and underserved individuals and helped to clothe them. The Ministry also provided food baskets for Thanksgiving and Christmas. Without a doubt, Pastor Beets pressed towards the indelible mark while on this earth with a love for God, His people, and His ministry like no other. His daily ambition was to carry out his responsibilities as a husband, father, evangelist, and pastor with an intense fervor that was boundless. Survivors include his wife, Lenora Beets of Cedar Rapids; children, Mark Anthony Williams of Cedar Rapids, Tamara Lynette (Wesley) McGee of Charlotte, North Carolina, Patrick Anthony (LaToya) Beets of Cedar Rapids, Erika Navette (Haywood) Stowe III of Decorah, Iowa, and Eric John Gibson-Beets of Kansas City, Missouri; grandchildren, Wesley Jr., Londyn, and Brooklyn McGee, Neal and Rilynn Beets, Haywood IV, Hayley, Haylyn, and Hayven Stowe; god-daughter Laura (Eric) Clark; brother, Colbert “Billy” (Clay) Beets of Cedar Rapids; and “Nieces/special sisters”, Flossie Wright and Beatrix (Harlan) Mitchell; and sisters and brothers-in-laws, Willie Lee Carr of Yazoo City, Mississippi, Charlie (Mary) Carpenter of Louise, Mississippi, Arlean (Billy) Franklin of Robins, Iowa, Anna (Claudell) Mims of Cedar Rapids, Thelma (Alfred) Ellis of Bloomington, Illinois, and Mary Beets of Marion, Iowa; as well as a host of nieces, nephews, and cousins. Pastor Beets was preceded in death by his parents as well as his siblings, Alvin “Bo” Beets, Alvernia Franklin, Mamie Beets, Lavernia “Smokey” Johnson, James Beets, Thomas Beets, and Bishop Paul V. Beets. In lieu of flowers, memorials may be directed to the Beets Family at Word of Faith Pentecostal COGIC, P.O. Box 8221, Cedar Rapids, IA 52408. Memorials may also be submitted to the Word of Faith Pastoral Memorial Fund by going to https://www.wordoffaithcogic.org/donate, “Give Now via Givelify”.

The family of Rev. Wendell A. Beets created this Life Tributes page to make it easy to share your memories.

Send flowers to the Beets family.