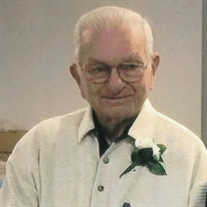 Willard James Horak, 88, of Center Point, Iowa, passed away on Saturday, June 12, 2021, at his home, surrounded by his loving family. A visitation will be held from 11 a.m. to 1 pm. on Wednesday, June 16, 2021, at Murdoch Funeral Home & Cremation Service in Center Point. A funeral service will follow at 1 p.m. on Wednesday, at the funeral home. Burial with military honors will follow at Center Point Cemetery in Center Point. All guests are respectfully requested to wear a face mask and practice social distancing. Willard was born on September 9, 1932, in Center Point, the son of William “Bill” and Mary Rose (Varak) Horak. He graduated from Center Point High School and went on to serve honorably in the United States Navy from 1951 to 1954, during the Korean Conflict. He was stationed on the U.S.S Frontier AD25. In his early years, Willard enjoyed roller skating, auto mechanics, and playing baseball. On November 16, 1957, he was united in marriage to Rose Mary Fuchs at Immaculate Conception Catholic Church in Cedar Rapids, Iowa. Willard was an adjuster and served on the Board of Directors for Bohemian Mutual Insurance for several years. He and Rose lived and raised their five children on a farm in Center Point. Willard was extremely proud of his children and loved spending time with his grandchildren and great-grandchildren. He loved to trap shoot, play cards and games, driving, fishing and hunting. Willard will be greatly missed by all who knew and loved him. Willard is survived and lovingly remembered by his wife of 63 years, Rose Mary Horak of Center Point; five children, Daniel J. (Lori) Horak of Marion, Iowa, Douglas W. (Anita) Horak of Anamosa, Iowa, Gregory S. (Lola) Horak of Springville, Alabama, Teri L. (Larry) Leggett of Marion, and Susan K. (Dan) Bonnichsen of Center Point; 14 grandchildren; and 30 great-grandchildren. He was preceded in death by his parents; six siblings; mother-in-law; father-in-law; and several nephews. In lieu of flowers, memorials in Willard’s memory may be made to the American Cancer Society.

The family of Willard James Horak created this Life Tributes page to make it easy to share your memories.

Willard James Horak, 88, of Center Point, Iowa, passed away on...

Send flowers to the Horak family.