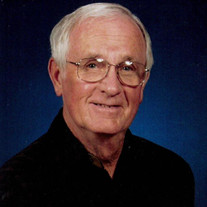 William “Bill” John Grundy, Jr., 90, of Marion, Iowa, passed away peacefully on Monday, November 29, 2021. Family will greet friends and family from 4:00 to 7:00 p.m. on Monday, December 6, 2021, at Murdoch Funeral Home & Cremation Service of Marion. A Funeral Mass will be held at 10:30 a.m. on Tuesday, December 7, 2021, at St. Joseph Catholic Church in Marion, Reverend David O’Connor officiating. Interment will take place at a later date at Oak Shade Cemetery in Marion. Bill was born on May 20, 1931, in Des Moines, Iowa. He was a graduate of Senn High School in Chicago, Illinois, where he was the all-around high school gymnastics champion. Bill went on to serve honorably in the United States Navy. He served aboard the USS Stephen Potter Destroyer during the Korean War. On June 13, 1959, Bill was united in marriage to Sharron Ozburn at St. Joseph Catholic Church. To this union, three children were born, Mark, Chris, and Matt. Bill worked for Collins Radio for 14 years then went on to work as Placement Director for Kirkwood Community College, retiring in 1992, at the age of 61. He was a longtime active member of St. Joseph Catholic Church. Bill served as the president of the First Pastoral Council, was a Eucharistic Minister, and a church lector. He was a member of the Marion City Council from 1965 until 1973 when he was elected Mayor and served for 14 years. Bill enjoyed the outdoors, golfing, fishing, and caring for his plants and garden. He loved to sing and had been known to constantly whistle a happy tune. Bill especially enjoyed spending time with his family. He and Sharron spent 25 years fishing at Greers Ferry Lake in Arkansas in the spring and fall. Bill will be greatly missed by all who knew and loved him. Bill is survived and lovingly remembered by his wife of 62 years, Sharron of Marion; daughter, Chris (Bill) Abigt of Ottumwa; son, Matt (Jodie) Grundy of Marion; eight grandchildren; nine great-grandchildren. He was preceded in death by his parents; son, Mark Grundy; and two sisters, Dorothy and Mary. In lieu of flowers, memorials in Bill’s memory may be directed to either the New Mercy HallMar Village Alzheimer’s facility, or the Dennis & Donna Oldorf Hospice House of Mercy.

The family of William "Bill" John Grundy Jr. created this Life Tributes page to make it easy to share your memories.

Send flowers to the Grundy family.