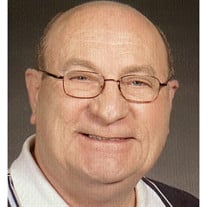 William E. “Bill” Judd, Sr., age 80, of Oelwein and formerly of Clinton, Iowa died Thursday, October 15, 2020 in Rochester, MN following a lengthy and difficult battle with pulmonary hypertension. Funeral services will be held at 10:30 a.m. Wednesday, October 21, 2020 at Pape Funeral Home, 2308 Pershing Blvd., Clinton, IA. Burial will be in Clinton Lawn Cemetery with Full Military Honors accorded by Clinton AMVETS and the Iowa Army National Guard Honors Detail. Friends may call from 4:00-7:00 p.m. Tuesday, October 20, 2020 and an hour prior to the services on Wednesday at Pape Funeral Home in Clinton. A memorial fund has been established in his memory. A recording of Bill's Funeral Service and Graveside service is available on this webpage, select the Photos & Videos or Media tab. He was born June 24, 1940 in Maquoketa, Iowa the son of Woodworth Maverish and Bernetta Catherine (Andresen) Judd. Bill graduated from Clinton High School and earned an Associate’s Degree in Business from Sauk Valley College in Sterling, Illinois. He was united in marriage with Mary Kathryn “Mary Kay” Allen on July 20, 1963 at St. Mary’s Catholic Church in Strawberry Point, Iowa and was a Veteran of the US Army. Bill was a sales representative for NABISCO for 30 years, retiring in April 1996. He was actively involved in the Clinton community, serving as a City Council member from 1980-1992. Bill was a former member of the Clinton YMCA Y’s Men’s Club, and St. Mary’s Catholic Church in Clinton where he served on the parish council and as a lector and communion distributer for many years. He relocated to Oelwein after retirement, continued to work part time for NABISCO and enjoyed traveling with his wife Mary Kay. They loved to spend time in warm places during the winter, including Monterey, CA and Panama City Beach, FL. Bill was a person of great integrity. He always had an opinion and you could be sure he had thought it through before sharing it. He was a gifted father and provider for his wife and children. Bill treasured time spent with his children and grandchildren and used those opportunities to teach and counsel them about life. An avid trout fisherman, Bill spent many happy hours on numerous trout streams in northeast Iowa. He was fond of talking with his coffee buddies at the “Learning Center” (McDonald’s) in Oelwein each morning, liked to read books and watch movies. Survivors include his wife of 57 years, Mary Kay Judd of Oelwein; 3 sons, William E. “Bill” Judd, Jr. of Center Point, IA, Philip (Alissa) Judd of Clinton, Patrick Judd of North Liberty, IA; a daughter, Meggan Judd of Clinton, IA; 7 grandchildren, Jonathan (Chelsea) Judd of Rowley, IA, Jessica Judd, Haleigh Parr, Michael Judd, Alexander Judd and Carter Cant, all of Clinton and Eric Zafft of Decorah, IA; 2 great grandchildren, Lillee and Zeke Cass of Clinton and another great grandson, Ian William Judd, due December 5, 2020; 2 brothers, Tom (Linda) Judd, of Clinton and Robert (Mari Jo) Judd of Iowa City; a sister-in-law, Karen Judd of Clinton; a half-sister, Leona Schmidt of Morrison, IL and numerous nieces and nephews. He was preceded in death by his parents; a son, Michael David Judd; a daughter-in-law, Mary Ann Judd; a brother, Jerald “Jerry” Judd; 2 half-sisters, Eleanor Winters and Kay Booth; and a half-brother, Carroll “Bud” Judd.

The family of William "Bill" E. Judd Sr. created this Life Tributes page to make it easy to share your memories.

Send flowers to the Judd family.