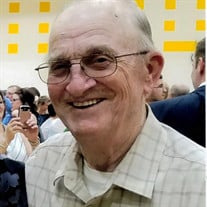 William “Bill” N. Russ, 86, of Manchester formerly of Delhi, Iowa, passed away on Saturday, December 25, 2021, at Marietta’s Place in Manchester. Visitation for Bill will be held on Sunday, January 2, 2022, from 2 to 6 p.m. at St. John Catholic Church in Delhi with a Knight’s of Columbus Rosary beginning at 1:45 p.m. Additional Visitation will take from 9:30 to 10:30 a.m., Monday, January 3, 2022, with a Mass of Christian Burial to follow at 10:30 a.m., with Reverend Kremer officiating. Burial will take place at St. John Catholic Cemetery, Delhi, Iowa. Bohnenkamp-Murdoch Funeral Home & Cremation Service, in Manchester is in charge of arrangements. Bill was born September 30, 1935, in Hopkinton, Iowa, the son of John and Margaret (Lahr) Russ. He graduated from Delhi High School in 1953. Bill married Marcia Shaw on January 19, 1957, in Delhi, Iowa; five children were born into this union. Bill was a member of the St. John Catholic Church in Delhi. He enjoyed doing carpentry work and did many jobs at the Church. He was a faithful man and was always willing to help others. Most of all he enjoyed spending time with Marcia and his family. Bill is survived by his wife of 64 years, Marcia; five children, Diane (Daniel) Roling of Earlville, Steven Russ of Manchester, Cheryl (Rick) Dietiker of Hopkinton, Karen (Daniel) Walter of Macomb, Illinois, Linda (Greg) Lahr of Manchester, Iowa; ten grandchildren; and six great-grandchildren. He was preceded in death by his parents, John and Margaret Russ; two brothers, John Russ, Alvin Russ; and two sisters, Margaret O’Connell and Joan Marsh. In Lieu of flowers memorials maybe directed to the family to be designated at a later date. Please share a memory of Bill at www.murdochfuneralhome.com under obituaries.

The family of William "Bill" N. Russ created this Life Tributes page to make it easy to share your memories.

Send flowers to the Russ family.