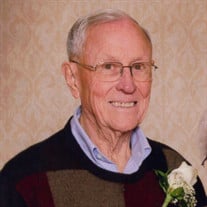 William “Bill” B. Walters, 94, of Marion, Iowa, passed away on Tuesday, February 22, 2022, at Summit Pointe Senior Living Community in Marion. In accordance with his wishes, cremation has taken place and private family services will be held. Murdoch Funeral Home & Cremation Service of Marion is serving the family. Bill was born on January 18, 1928, in Maricopa County, Arizona, the son of Roy and Mae (Strong) Walters. He graduated from Onslow High School in Onslow, Iowa, and went on to attend Cornell College for two years. He served honorably in the United States Army during World War II, from 1946 to 1947. He was united in marriage to Eleanor Kennedy on February 21, 1953, in Cedar Rapids, Iowa, which according to his wife, was the best decision he ever made. Bill worked his entire career at Walters Lumber Company, where he presided as President. He worked as an elder at both the Wyoming and Onslow Presbyterian Churches, and served for 20 years on the Jones County Board of Review, and nine years on the Jones County School Board. He was a member of the American Legion Post #259 in Wyoming and a member of the Masonic Keystone Lodge #206 for over 60 years. Bill will be remembered as a loyal and dedicated father and grandfather, faithfully attending the many sporting events and activities of his grandchildren. He was an avid reader and traveler, enjoying many road trips with his extended family, regardless of the number of Polly Pockets his granddaughters left stuck in the seats of his Buick. Bill was unwaveringly dependable and a steady force in the lives of this family who will never forget his devotion. Bill will be greatly missed by all who knew and loved him. Bill is survived and lovingly remembered by his two sons, Kenny (Rhonda) Walters of Marion, and David (Laura) Walters of Traverse City, Michigan; five grandchildren, Joshua, Zachary, and Aubrey Brinkman, Ella, and Emma Walters; and six great-grandchildren, Beckett, Kaedin, Keller, Lincoln, Jozie, and Maggie Brinkman. He was preceded in death by his parents, Roy and Mae Walters; wife, Eleanor Walters in 2021; and brother, Don “Red” Walters. Memorials in Bill’s memory may be made to either Camp Wyoming at 9106 42nd Ave, Wyoming, Iowa, 52362, or to Onslow Presbyterian Church at 310 Main Street, Onslow, Iowa, 52321.

William &#8220;Bill&#8221; B. Walters, 94, of Marion, Iowa, passed away on Tuesday, February 22, 2022, at Summit Pointe Senior Living Community in Marion. In accordance with his wishes, cremation has taken place and private family services will... View Obituary & Service Information

The family of William "Bill" B. Walters created this Life Tributes page to make it easy to share your memories.

Send flowers to the Walters family.