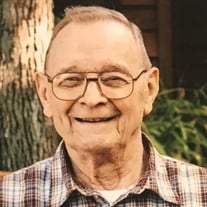 William (Bill) F. Karteus, Jr., 87, passed away peacefully in his sleep on December 5, 2021, following a brief illness. Burial will take place at a later date at Oakland Cemetery in Manchester, Iowa. Murdoch Funeral Home & Cremation Service of Marion is assisting the family. Surviving are his daughter, Jean Graham and her husband, Greg, who live in Parrish, Florida; his son, Jon Karteus and his wife, Rieko, who live in Marion, Iowa, and his son, Jay Karteus, who lives in Center Point, Iowa. Also surviving are five grandchildren: Rachel, Rebecca, Jamie, Jessica, and Jon; and four great grandchildren: Bradley, Bailey, Logan, and Nyla. Bill is preceded in death by his parents, William F. Karteus, Sr. and Edna Mattson Karteus, and his sister, Sharon Karteus. Bill was born October 5, 1934, in Edgewood, Iowa. He attended school and graduated high school in Oneida, Iowa. Bill was drafted and joined the Army in 1953, served 2 years from February 1954 to 1956 during the Korean War, and was honorably discharged in 1956. After he was discharged, he used his Army training and worked as a heavy equipment operator for Guetzko in Manchester, Iowa. Later, he was trained by Honeywell in data processing and became a computer programmer working the majority of his life at FMC (Link Belt Speeder), McCleod Telecom, and Mercy Hospital. Bill was a quiet and reserved person, but he loved spending time with family and was a very caring and devoted father. In lieu of sending flowers, the family requests sending a donation to Disabled American Veterans (DAV) or to your preferred charitable organization.

The family of William Karteus created this Life Tributes page to make it easy to share your memories.

Send flowers to the Karteus family.